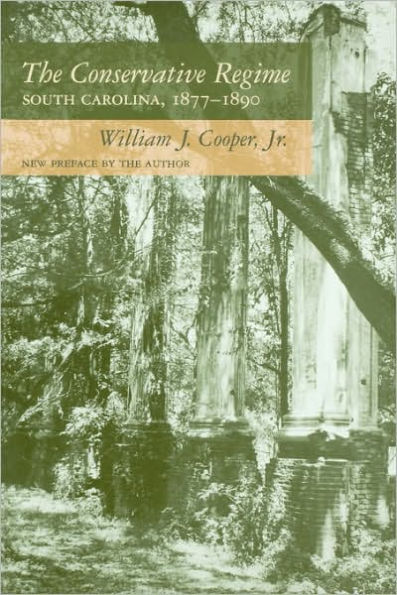 The definitive study of post-Reconstruction political culture in South Carolina

First published in 1968, The Conservative Regime: South Carolina, 1877-1890 remains one of the most often cited texts on the era. In the study that inaugurated his distinguished career, William J. Cooper, Jr., addresses two divergent political eras and the powerful figures who shaped them as South Carolina redefined itself in the wake of the Civil War and Reconstruction.

The 1876 election of former Confederate general Wade Hampton as governor marked the end of Reconstruction and led to the withdrawal of Federal troops from South Carolina and returned the state to one-party Democratic rule under Hampton's Confederate-veteran "Redeemers," or "Bourbons." Bourbon rule saw limited cooperation with African American leadership, but little in the way of economic growth. Reaction to the do-nothing policies of Hampton and the Bourbons brought the rise of Ben Tillman to the state's highest office. In this germinal account of the transition of power, Cooper assesses the ideology inherent in the politics of the planter-class Democrats to best understand their ascendance and subsequent downfall.

This edition of The Conservative Regime is augmented by a new preface from Cooper.


A native of South Carolina, William J. Cooper, Jr., is Boyd Professor of History at Louisiana State University. He is the author of Liberty and Slavery: Southern Politics to 1860; The South and the Politics of Slavery, 1828–1856; and Jefferson Davis, American; coauthor of The American South: A History; and coeditor of Writing the Civil War: The Quest to Understand.

"The Conservative Regime fills an important gap in South Carolina history, where the emphasis has been on Reconstruction and the Agrarian Revolt, and is a welcome edition to the list of state studies of a neglected period in Southern history. The writing is clear and the research, especially in South Carolina manuscripts, newspapers, and public documents, is exemplary."—Journal of Southern History