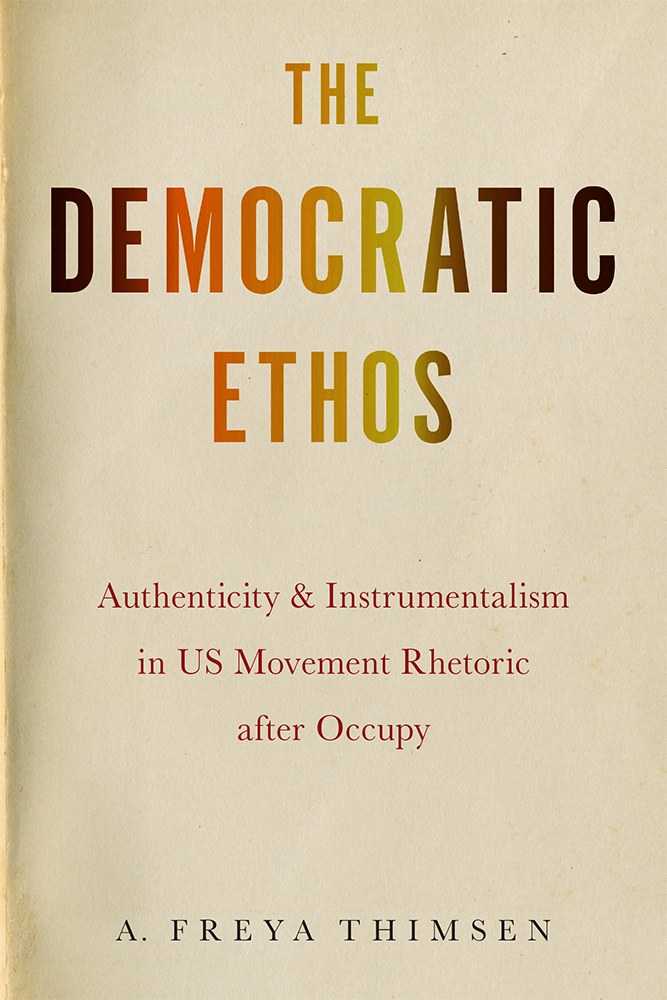 Authenticity and Instrumentalism in US Movement Rhetoric after Occupy

What did Occupy Wall Street accomplish? While it began as a startling disruption in politics as usual, in The Democratic Ethos Freya Thimsen argues that the movement's long-term importance rests in how its commitment to radical democratic self-organization has been adopted within more conventional forms of politics. Occupy changed what counts as credible democratic coordination and how democracy is performed, as demonstrated in opposition to corporate political influence, rural antifracking activism, and political campaigns.

By comparing instances of progressive politics that demonstrate the democratic ethos developed and promoted by Occupy and those that do not, Thimsen illustrates how radical and conventional rhetorical strategies can be brought together to seek democratic change. Combining insights from rhetorical studies, performance studies, political theory, and sociology, The Democratic Ethos offers a set of conceptual tools for analyzing anticorporate democracy-movement politics in the twenty-first century.


A. Freya Thimsen is an assistant professor in the English Department at Indiana University. Her work has been published in journals including Philosophy & Rhetoric, Quarterly Journal of Speech, and Review of Communication.

"The Democratic Ethos is a must-read for anyone interested in democracy. If a democrat is someone who is motivated by freedom, equality, social justice, and political practices that allow for all people to share power meaningfully, then democracy is not only a way of life but also a way of thinking and communicating. A. Freya Thimsen's analysis of Occupy Wall Street's democratic ethos advances our understanding of how democratic thinking and democratic communication work together to create democratic possibilities."—Jennifer Mercieca, author of Demagogue for President: The Rhetorical Genius of Donald Trump

"The Democratic Ethos gives lie to the facile conclusion that Occupy led nowhere and insightfully untangles the dialectic of authenticity and instrumental effort that lies at the heart of politics and ethos alike."—Peter Simonson, University of Colorado Boulder

"In clear and accessible readings of current practices of rhetorical citizenship, A. Freya Thimsen masterfully connects ancient rhetorical concepts with contemporary political theory and media criticism in a theoretical account of lived movement activism. This book epitomizes rhetorical scholarship at its best: a critical yet constructively oriented analysis of ways to engage contemporary societal problems."—Lisa S. Villadsen, University of Copenhagen