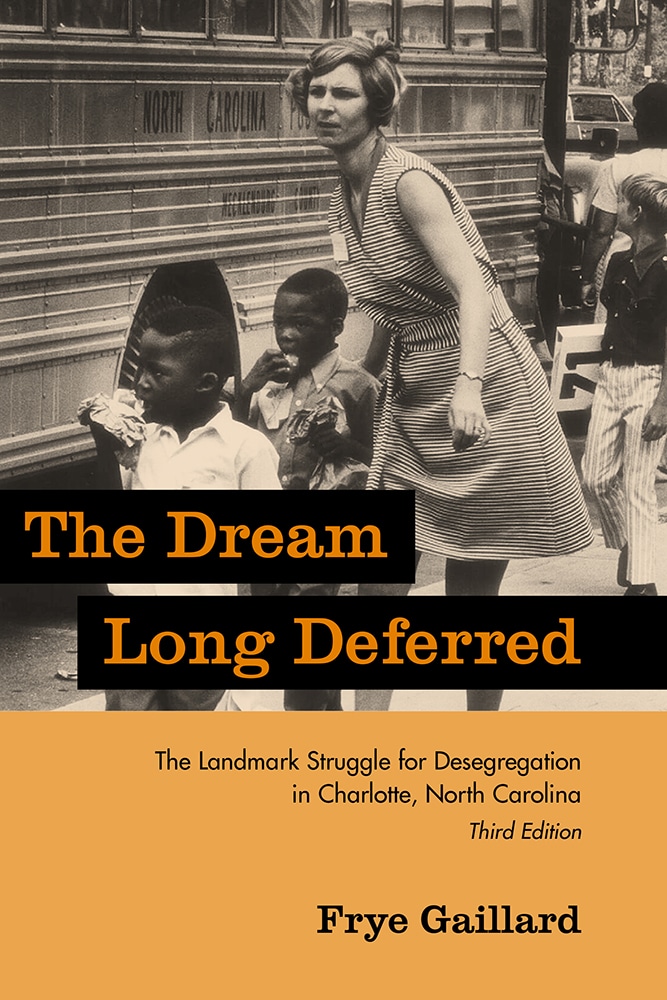 The Landmark Struggle for Desegregation in Charlotte, North Carolina

The Dream Long Deferred tells the fifty-year story of the landmark struggle for desegregation in Charlotte, North Carolina, and the present state of the city's public school system. Award-winning writer Frye Gaillard, who covered school integration for the Charlotte Observer, updates his earlier 1988 and 1999 editions of this work to examine the difficult circumstances of the present day.

When the struggle to desegregate Charlotte began in the 1950s, the city was much like many other New South cities. But unlike peer communities that would resist federal rulings, Charlotte chose to begin voluntary desegregation of its schools in 1957. Over the next decade it made consistent, if slow, progress toward greater integration.

The glacial pace of change frustrated Charlotte's black citizens, prompting them to file lawsuits in federal court to seek nothing less than complete integration. When the U.S. District Court in 1969, and subsequently the U.S. Supreme Court in 1971, upheld that demand in the landmark Swann v. Charlotte-Mecklenburg decision, Charlotte became the national test case for busing. Though the transition was not always peaceful, within five years Charlotte was a model of successful integration. North Carolinians of all races joined in public and private initiatives to make desegregation work and garnered national recognition for their achievement. Based on the favorable results, a powerful consensus developed in Charlotte that desegregation was morally right and educational beneficial. But that opinion was not to last.

Charlotte's population grew rapidly in the 1990s, and many new arrivals were weary of the status of the public school system. In 1999 a group of white citizens reopened the case to push for a return to neighborhood schools. A federal judge sided with them, finding that the plans initiated in the 1971 ruling were both unnecessary and unconstitutional because they were race-based. Charlotte's journey had come full circle.

Today, Gaillard explains, Charlotte's schools are becoming segregated once more—this time along both economic and racial lines. A growing number of white students are either leaving the public school system for private institutions or converging on a few exceptional schools in affluent communities. This exodus from neighborhood schools has put the future of the city's public school system in jeopardy once more.

In this new edition of The Dream Long Deferred, Gaillard chronicles the span of Charlotte's five-decade struggle with race in education to remind us that the national dilemma of equal educational opportunity remains unsettled. Balanced in his treatment of all sides, Gaillard gives the issue a human face so that historians, educators, and ordinary citizens can better glean understanding from the triumph and tragedy of one American community.


Frye Gaillard, writer in residence at the University of South Alabama, has written extensively about southern history, race relations, and culture. His nineteen books include Cradle of Freedom: Alabama and the Movement That Changed America—winner of the 2005 Lillian Smith Book Award. Gaillard writes for numerous national and regional publications including Parade, the Oxford American, Saturday Review, and the Washington Post.

"In the early 1970s the Charlotte, N.C., school system was the national test case for busing as a means of achieving racial desegregation. Gaillard, a Charlotte Observer editor who covered the issue as a reporter, emphasizes here that 'whatever the experience of other cities, busing was not a tragedy in Charlotte.' This interesting and well-written study focuses on those who fought to make busing work—parents and school principals, activists and reformers, lawyers and judges, journalists and ministers, average people who struggled to put doctrine ahead of self-interest."—Publishers Weekly

"Gaillard deftly tracks the recent changes in the school system. . . . He works to be fair to all sides."—Charlotte Observer

"Frye Gaillard has produced more than a perceptive study of the landmark Charlotte schools case; he has captured the nuance and flavor of a city in crisis."—J. Anthony Lukas, Pulitzer Prize-winning author of Common Ground: A Turbulent Decade in the Lives of Three American Families