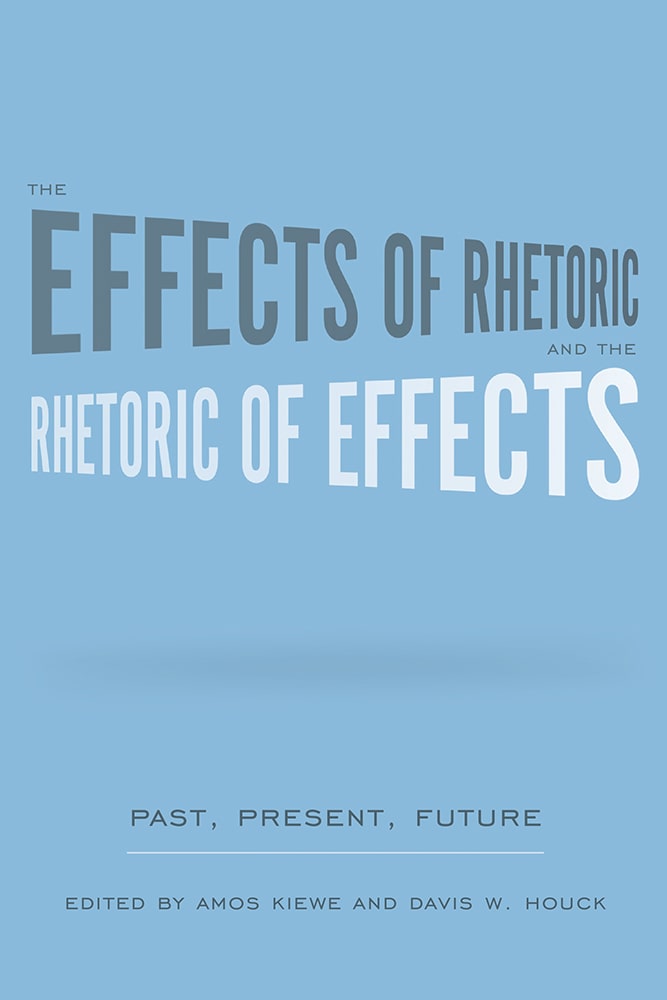 The Effects of Rhetoric and the Rhetoric of Effects

The Effects of Rhetoric and the Rhetoric of Effects tackles one of the thorniest and longest-standing issues in the discipline of rhetoric—the issue of effects. While the field's founders valued the assessment of a speech's effects, later scholars moved away from it, privileging textual analysis, symbols, and meaning. Though situated and strategic oral rhetoric is created for instrumental ends, its study has been limited in recent decades. Editors Amos Kiewe and Davis W. Houck seek to resurrect the study of effects and consider it as the cornerstone of the rhetorical critic's enterprise—what rhetoric actually does.

In 1925, when Herbert Wichelns essentially created the field of rhetorical criticism, he founded it on the cornerstone of effect: what did oral rhetoric do to an observable audience? Wichelns's founding statement held sway for decades, even as rhetorical critics struggled doggedly to determine "causes" to rhetoric's effects. As the speech discipline matured and cast off the ghost of Aristotelian criticism and its seeming obsession with effect, critics eventually adopted the study of symbol systems as a guiding thematic. That thematic, while enormously productive, never resolved larger questions of what these symbol systems might be doing—beyond their incipient meaning.

In this volume scholars across several subfields of rhetorical criticism return to the study of effect in a world impossibly different from pre-World War II era scholarship. With the rhetorical revolution and the linguistic turn across the humanities and social sciences, effects can and should be reconceptualized to engage the myriad ways that rhetoric matters to audiences—whether in the form of listening to a speech or reading an online script for a documentary. Rhetoricians have always known that rhetoric matters; this volume asks how and how we might demonstrate that.


Amos Kiewe is a professor of communication and rhetorical studies at Syracuse University. He is the author or editor of numerous books including The Modern Presidency and Crisis Rhetoric, FDR's Body Politics: The Rhetoric of Disability (with Davis W. Houck), and FDR's First Fireside Chat: Public Confidence and the Banking Crisis.

Davis W. Houck is a professor of communication at Florida State University. He is the author or editor of ten books, including several critically acclaimed anthologies about the American civil rights movement.

"Ultimately, Kiewe and Houck have compiled essays that should prove useful for any critic-in-training, especially scholars who need to learn how to argue with pesky reviewers who think concerns about effects are either unimportant or impossible to document."—Rhetoric & Public Affairs

"Kiewe and Houck are to be congratulated for turning a critical lens on the issues of rhetorical effect and the effects of rhetoric. This book is meta-theory and criticism at its best. The opening essay by Carole Blair is a tour de force that should be required reading for every rhetorician. Twelve essays plus the introduction and conclusion by the editors make this a collection every serious scholar of rhetoric will want to own. It will also function nicely as a required text in graduate-level courses in rhetorical theory and criticism."—Martin J. Medhurst, Baylor University

"Seldom has a book's title been so accurate. This collection renews rhetoric's traditional, yet recently neglected, concern with effects by rigorously critiquing the means by which we might understand rhetoric's force as well as the rhetoric of those efforts, the ways scholars define, explain, and dispute the effects of rhetorical discourse. This is a much-needed effort by a wonderful group of scholars."—John Murphy, associate professor of communication, University of Illinois

"Amos Kiewe and Davis W. Houck have assembled an interesting collection of essays addressing a key question in rhetorical studies: How do we talk about rhetoric's effects? Attacking that question from various angles, the volume combines theoretical probes with case studies reflecting both historical and future trends. A very useful volume, particularly for students unfamiliar with the long history of disciplinary debates over rhetorical effects."—Michael Hogan, liberal arts research professor, and director, Center for Democratic Deliberation, Pennsylvania State University

"This important volume attends to long-standing debates, disagreements, and questions surrounding effect in rhetoric and public address. Touchstone issues about effect persist both in our research and in our classrooms. This collection brings together top scholars in the field - across academic generations - to disentangle the limitations and to assess the value of effect in rhetorical studies. Beginning with a beautifully written Introduction that encapsulates a 100-year swath of time about effect and continuing through to enlivening case studies within several contexts of artifact and symbolic expression, Houck and Kiewe's edited collection is sure to be valuable and valued for years to come. In fact, this book will be a staple of any and all classes I teach in rhetorical theory and criticism and, moreover, it will be an eternally ready source for my own work."—Jason Edward Black, associate professor of rhetoric and public discourse, affiliate professor of gender and race studies, University of Alabama

"Amos Kiewe and Davis Houck have assembled some of the discipline's finest scholars to produce this important collection of essays dedicated to understanding the role of effect in the study and practice of rhetoric. The various chapters approach effects from a variety of theoretical perspectives, yielding a rich, textured, and expansive set of analyses. This volume is a theoretical and methodological goldmine, and a must-read for anyone interested in rhetoric and its historical, economic, and political contexts."—Mary E. Stuckey, professor, communication and political science, Georgia State University