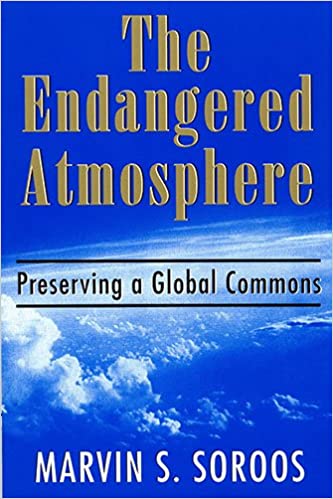 With the Earth's atmosphere increasingly being used as a convenient sink for myriad pollutants, humanity faces the daunting problem of conserving a vital resource which, like the oceans, outer space, and Antarctica, defies geographical boundary. In The Endangered Atmosphere, Marvin S. Soroos considers how this resource is being altered and degraded by a rapidly growing and industrializing human population and what is being done to preserve its essential qualities.

Soroos describes the atmosphere as a global commons, a domain in which limited, depletable resources are used by multiple parties for individual gain. He discusses the limited capacity of the atmosphere to absorb and disperse pollutants, the essential role that international scientific cooperation plays in understanding and protecting its unique characteristics, and the value of the term "environmental security" for directing attention to its worsening condition.

In case studies of four international atmospheric agreements—governing atmospheric testing of nuclear weapons, acid precipitation, ozone-layer depletion, and global climate change—Soroos demonstrates the uneven, piecemeal approach that the international community has taken. He draws conclusions regarding the circumstances that favor cooperation among states and ponders the likelihood that governments will pursue environmental security in a preventive, collaborative way rather than by depending on the self-reliant, defensive strategies that have proved so costly and counterproductive in the pursuit of military security.


Marvin S. Soroos is a professor and the chair of the Department of Political Science and Public Administration at North Carolina State University. He is the author of Beyond Sovereignty: The Challenge of Global Policy, an author of The Environment in the Global Arena, and an editor of The Global Predicament: Ecological Perspectives on World Order.

"A very important book for the field of international environmental politics and for international relations as well. . . By reaching beyond traditional analytical approaches to environmental issues, by collecting and connecting four specific atmosphere-related cases, and by suggesting that environmental issues are just as critical to security as physical protection, [Soroos] will no doubt launch an important debate within the field."—Vicki L. Golich, California State University-San Marcos