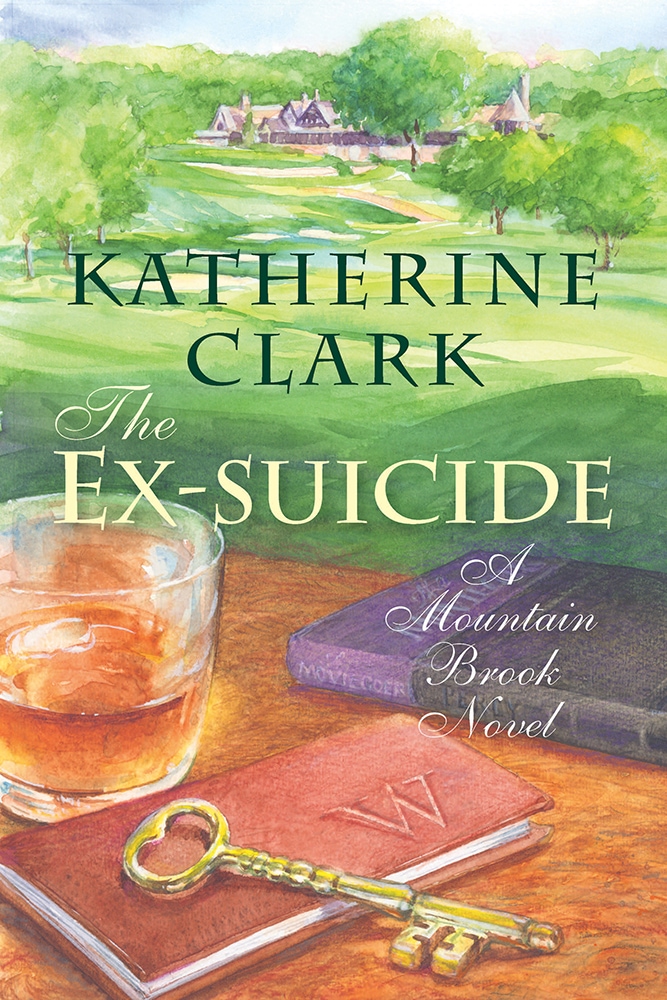 The Ex-Suicide, Katherine Clark's fourth Mountain Brook novel, is a satirical comedy of manners about a prominent Alabama family living across the street from the Birmingham Country Club. The house happens to be where the writer Walker Percy lived as a child with his family until his father committed suicide in the attic with a shotgun. The only son of the current residents, Hamilton "Ham" Whitmire has several Ivy League degrees as well as a generous trust fund but is striving mainly to be an "ex-suicide," as defined by Percy's writings. As a result of Ham's intellectual aspirations and philosophical principles, and thanks to his trust fund, he has succeeded only in figuring out what he does not want to do with his life. Unfortunately this comprises just about all known occupations, but especially any involving the family business, which his imperious, society-matron mother insists he take over from his aging father.

When the novel opens, the thirty-seven-year-old son has recently returned to his hometown and taken a teaching position at a historically black college in the "other" Birmingham—not the one where he grew up. As an anxiety-ridden, panic-attack-prone depressive in a perpetual state of existential crisis, Ham must plan carefully how to get through each day without putting his life in the hands of the mental-health-care professionals. But, according to his mother, he must also take over the reins of the family business, get married, and carry on the family name.

Ham isn't in Birmingham long before he learns his college is also in an existential crisis and fighting to keep its doors open. Even worse, circumstances force him to take at least an interest in the family business. While seeking refuge and stability in the waiting room of his therapist's office, he finds himself in the emotional thrall of a beautiful old flame who is in the midst of a devastating divorce. She is anxious to have Ham back in her life, at least as an escort, but probably more.

Will Ham buckle under all the pressures—as Percy's father famously did in the attic of what is now his parents' home? Or will he be able to pull himself together and live up to society's (and his mother's) expectations? Fortunately Ham is one of Norman Laney's former pupils, and Laney never gives up on a student. In the midst of Ham's crisis, Laney steps into the breach in hopes that Ham chooses life as an ex-suicide.


Katherine Clark holds an A.B. degree in English from Harvard and a Ph.D. in English from Emory. She is the coauthor of the oral biographies Motherwit: An Alabama Midwife's Story, with Onnie Lee Logan, and Milking the Moon: A Southerner's Story of Life on This Planet, a finalist for a National Book Critics Circle award, coauthored with Eugene Walter. The Ex-suicide is the fourth in her series of novels featuring Laney and his students and is preceded by The Headmaster's Darlings (winner of the 2015 Willie Morris Award for Southern Fiction), All the Governor's Men, and The Harvard Bride, all part of the University of South Carolina Press's Story River Books. Clark is working on Pat Conroy's oral biography, also forthcoming from the University of South Carolina Press series. She lives on the Gulf Coast.

"Katherine Clark's power as a novelist is on full display in her comic, shrewd, and unflagging interrogation of the South on the cusp of reluctant but nonetheless metamorphic change."—Pat Conroy

"Returning from the Ivy League to teach at a historically black college in Birmingham, Ham Whitmore becomes an agent of change as his privileged hometown, nearby Mountain Brook, struggles with entrenched attitudes about race and class. Katherine Clark's critical yet compassionate wit illuminates the darkness of Southern stereotypes in this highly entertaining satire of Alabama high society."—Allen Wier, author of Tehano and Late Night, Early Morning

"Katherine Clark's The Ex-Suicide wonderfully achieves that grand mix of history and gossip that gives life and spirit to storytelling, providing the reader with an afterglow of pleasure that only an engaging adventure can offer. A remarkably accomplished writer, Clark is a name to remember for lovers of language."—Terry Kay, author of To Dance with the White Dog and The King Who Made Paper Flowers

"When Hamilton Whitmire bumbles home to Birmingham, he fails to be the heroic Southern gentleman Alabama and his mother expect. Several Ivy League degrees, a generous trust fund, and months of therapy aren't helping. It's worth every funny, tender, chaotic and wise page Katherine Clark has written, to find out why Hamilton's daddy is winking in the last line."—Mary Hood, author of And Venus Is Blue and A Clear View of the Southern Sky