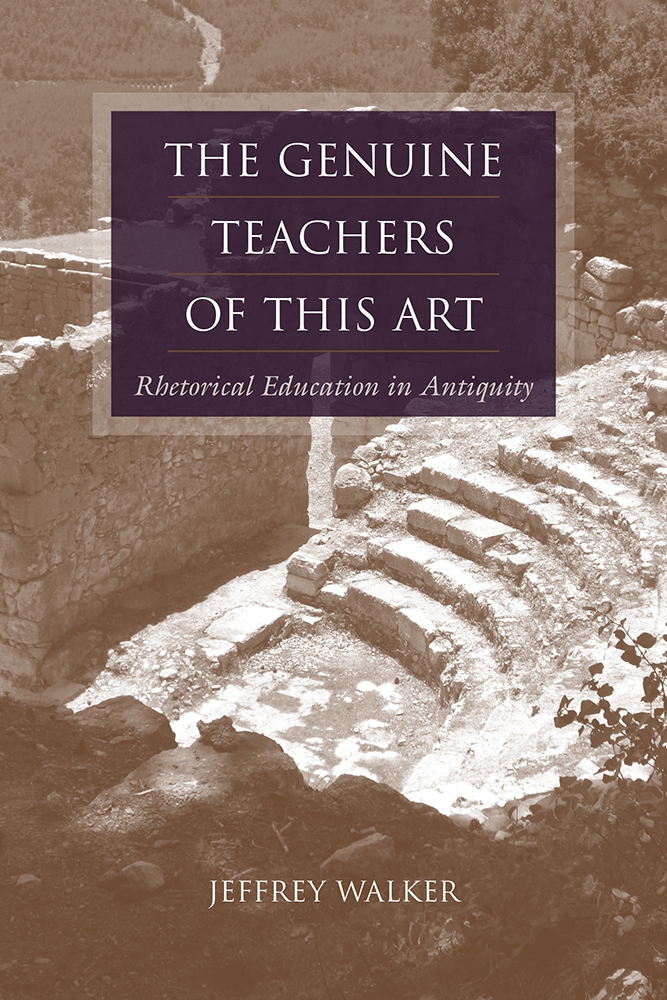 The Genuine Teachers of This Art

Genuine Teachers of This Art examines the technê, or "handbook," tradition—which it controversially suggests began with Isocrates—as the central tradition in ancient rhetoric and a potential model for contemporary rhetoric. From this innovative perspective, Jeffrey Walker offers reconsiderations of rhetorical theories and schoolroom practices from early to late antiquity as the true aim of the philosophical rhetoric of Isocrates and as the distinctive expression of what Cicero called "the genuine teachers of this art."

Walker makes a case for considering rhetoric not as an Aristotelian critical-theoretical discipline, but as an Isocratean pedagogical discipline in which the art of rhetoric is neither an art of producing critical theory nor even an art of producing speeches and texts, but an art of producing speakers and writers. He grounds his study in pedagogical theses mined from revealing against-the-grain readings of Cicero, Isocrates, and Dionysius of Halicarnassus. Walker also locates supporting examples from a host of other sources, including Aelius Theon, Aphthonius, the Rhetoric to Alexander, the Rhetoric to Herennius, Quintilian, Hermogenes, Hermagoras, Lucian, Libanius, Apsines, the Anonymous Seguerianus, and fragments of ancient student writing preserved in papyri. Walker's epilogue considers the relevance of the ancient technê tradition for the modern discipline of rhetoric, arguing that rhetoric is defined foremost by its pedagogical enterprise.

Jeffrey Walker is a professor and the chair of the Department of Rhetoric and Writing at the University of Texas at Austin. He is the author of Rhetoric and Poetics in Antiquity and Bardic Ethos and the American Epic Poem, and the coauthor of Rhetorical Analysis: A Brief Guide for Writers (with Mark Garrett Longaker) and Investigating Arguments: Readings for College Writing (with Glen McClish).

"Readers will find here an eloquent exposition of the mean and ends of Classical rhetorical pedagogy, explaining in detail the role of rhetorical exercises, both elementary and advanced, in the traditional curriculum. In doing so, Jeffrey Walker provides a lucid survey of usually overlooked and undervalued texts, and provides as well a compelling argument as to why those texts need to be read by today's teachers of rhetoric and composition."—Thomas M. Conley, professor emeritus of communication, University of Illinois at Urbana-Champaign

"Jeffrey Walker's The Genuine Teachers of This Art accomplishes two goals. For historians of rhetoric, Walker reinterprets Isocrates as the father of the technê, tradition. He reconstructs Isocrates's teaching methods and, drawing on papyrus fragments and analogous surviving texts, generates a convincing and illuminating version of Isocrates's own lost rhetorical treatise. For contemporary teachers, Walker argues persuasively for the relevance of the ancient rhetorical tradition to their own goals and, most importantly, classroom practices. Like his earlier Rhetoric and Poetics in Antiquity, Walker's latest book combines humane, common-sense analysis and interpretation with impeccable and elegant scholarship."—Marjorie Curry Woods, author of Classroom Commentaries: Teaching the Poetria nova across Medieval and Renaissance Europe