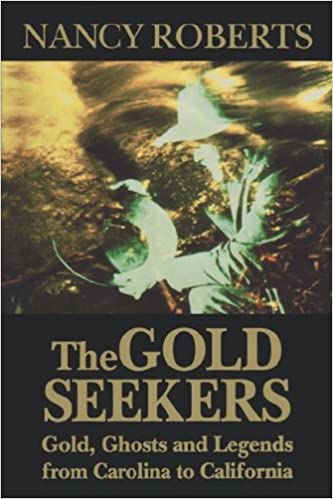 Gold, Ghosts and Legends from Carolina to California

This is the first book to tie together the earlier gold rush in the Carolinas and Georgia with the well-known California gold rush of 1849. It presents a history of the Southern gold rush and the legends that have grown up around it. Nancy Roberts tells how it all began in North Carolina, which supplied all the domestic gold coined at the U.S. Mint between 1804 and 1828. She tells the story of the discovery of the gold in Virginia, the Carolinas, Georgia, and Alabama and later in California and Colorado, including how the Virginia, Carolina and Georgia gold miners abandoned their mines within weeks after news arrived of the discovery of gold at Sutter's Creek. And, for a while, they were said to be the only experienced miners in the Western gold fields.

Ms. Roberts recreates with gusto and suspense the experiences of real people—the adventurers and entrepreneurs, family men and rascals, immigrants and bandits, entertainers and miners—and also includes several tales of the supernatural from the period.

There was North Carolina's flamboyant Walter George Newman, who fleeced the wolves of Wall Street; "Fool Billy," who South Carolinians disocered was not a fool at all; a romantic specter called Scarlett O'Hara of the Dorn Mine; Georgian Green Russell, with his beard braided like a pirate, who founded Denver; "Free Jim," the only black man in Dahlonega to own his own gold mine only to leave it for San Francisco; the Grisly Ghost of Gold Hill; a general from North Carolina who became an influential Californian; the ghost Bride of Vallecito; and California's bandit, the enigmatic Black Bart.


Nancy Roberts is a popular Southern writer who frequently lectures on folklore and creative writing. She received a degree in Comparative Literature from the University of North Carolina at Chapel Hill and attended graduate school at the University of Miami. The author of more than twenty books, published by Doubleday, Macmillan, the University of South Carolina Press and others, her books have sold more than a million copies. Her stories are a blend of suspense and mystery enriched by an account of the historic events which have often given rise to the stories. Termed the "custodian of the Twilight Zone" by Southern Living magazine, Ms. Roberts has been the recipient of numerous awards throughout her career.