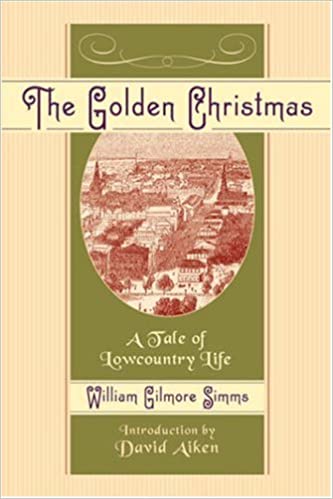 A Tale of Lowcountry Life

Drawing influence from Romeo and Juliet and A Christmas Carol, Simms centers his plot on the pride of a Huguenot family, the prejudice of an English family, and the plight of star-crossed lovers, Ned Bulmer and Paula Bonneau, to win the blessings of both feuding houses amid a festive and frantic holiday season. Simms populates his novel with a lively cast—a learned Northern professor, a young English nobleman, opinionated widows, a blustery plantation owner, a condescending servant, a pig-thieving coachman, and a good-hearted barrister.

Interwoven into the text are engrossing details about the lavish decorations and festivities that were the hallmark of Christmas celebrations in the antebellum South. Vibrant fireworks, candles nestled in holly, games of whist and backgammon, Yule logs, eggnog, and a visit from Father Chrystmasse all play their parts as the narrative unfolds. Here, too, are accurate descriptions of dress, dialogue, recreation, cultural mores, social hierarchy, and a vivid tableau of a shopping trip to Charleston's King, Queen, and Meeting streets in the 1850s.

Equal parts novel of manners and comic romance, The Golden Christmas is now, as it has always been, a holiday gift to lovers of Southern lore from South Carolina's most famous author. This edition includes an introduction by Simms historian David Aiken.


William Gilmore Simms (1806–1870) was an accomplished poet, historian, dramatist, and critic and one of the nineteenth-century's most popular novelists. A monument stands today at Charleston's White Point Gardens as witness to this city's appreciation for the achievements of this native son.

David Aiken teaches English at the College of Charleston and the Citadel. He is a founding member of the William Gilmore Simms Society and has written or edited more than fifty articles and books on Simms and other Southern writers.