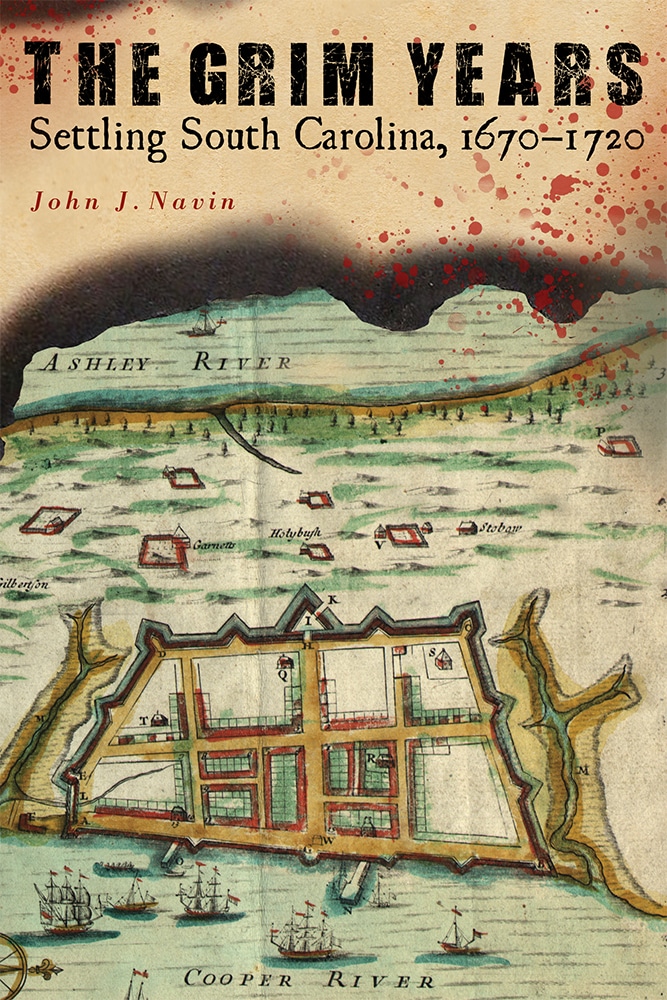 The Grim Years: Settling South Carolina, 1670-1720 is a graphic account of South Carolina's tumultuous beginnings, when calamity, violence, and ruthless exploitation were commonplace. With extraordinary detail and analysis, John J. Navin reveals the hardships that were experienced by people of all ethnicities and all stations in life during the first half-century of South Carolina's existence—years of misery caused by nature, pathogens, greed, and recklessness.

From South Carolina's founding in 1670 through 1720, a cadre of men rose to political and economic prominence, while ordinary colonists, enslaved Africans, and indigenous groups became trapped in a web of violence and oppression. Navin explains how eight English aristocrats, the Lords Proprietors, came to possess the vast Carolina grant and then enacted elaborate plans to recruit and control colonists as part of a grand moneymaking scheme. But those plans went awry, and the mainstays of the economy became hog and cattle ranching, lumber products, naval stores, deerskin exports, and the calamitous Indian slave trade. The settlers' relentless pursuit of wealth set the colony on a path toward prosperity but also toward a fatal dependency on slave labor. Rice would produce immense fortunes in South Carolina, but not during the colony's first fifty years. Religious and political turmoil instigated by settlers from Barbados eventually led to a total rejection of proprietary authority.

Using a variety of primary sources, Navin describes challenges that colonists faced, setbacks they experienced, and the effects of policies and practices initiated by elites and proprietors. Storms, fires, epidemics, and armed conflicts destroyed property, lives, and dreams. Threatened by the Native Americans they exploited, by the Africans they enslaved, and by their French and Spanish rivals, South Carolinians lived in continual fear. For some it was the price they paid for financial success. But for most there were no riches, and the possibility of a sudden, violent death was overshadowed by the misery of their day-to-day existence.

John J. Navin is a professor of history at Coastal Carolina University, where he teaches early American history and conducts research on community, race, and violence in colonial America. He holds a master's degree in American studies from Boston College and a Ph.D. in history from Brandeis University.

"In his splendid The Grim Years: Settling South Carolina, 1670-1720, John Navin narrates the compelling story of a colony besieged by meteorological, epidemiological, economic, and manmade catastrophes only to arise like the phoenix from its ashes. Meticulously researched, the Grim Years offers a fresh and exciting look at the forces that turned a floundering colonial experiment into England's most wealthy possession in British North America and set into motion the social and political dynamics that would influence the future of the United States."—Orville Vernon Burton, Clemson University

"Navin describes the efforts of European colonists to build a settler-plantation world and its impact on everyone in the region. This is a well-told tale about the creation of a grim, Hobbesian colonial world of disease, severe climate, and enslavement of all kinds that faced annihilation by Yamassees at the end of the grim years. The tragedy is that after surviving a new society emerged based on a Black majority, plantation slavery, and enormous profits for some."—Aaron Spencer Fogleman, Northern Illinois University

"John Navin's extraordinary scholarship offers a story that goes far beyond the "Great Men" of the time, reaching as deeply as possible into the lives of the lesser folks and those with no voice of their own: slaves, both African and Native American. I most strongly recommend this volume to scholars of the Atlantic World and the two Carolinas."—Wade G. Dudley, East Carolina University