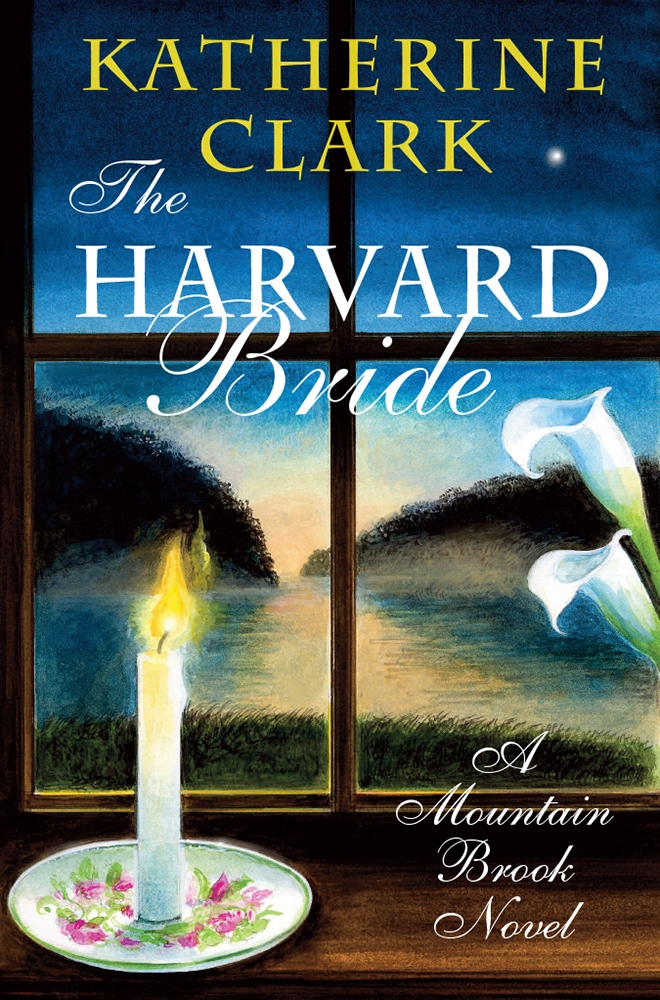 Katherine Clark's The Harvard Bride begins with the lavish Mountain Brook wedding of Daniel Dobbs and Caroline Elmore, college sweethearts introduced in Clark's second novel, All the Governor's Men. Picking up where the previous novel ended, The Harvard Bride is a wry comedy of manners and portrait of a marriage unfolding against the backdrop of the return of native southerners, with their newly completed Ivy League educations, to the self-contained world of Mountain Brook's "Tiny Kingdom."

As a newlywed Caroline struggles to find her bearings—unwilling to join the Junior League, look for a first house, contemplate motherhood, or even finish her thank-you notes. Even worse, she can't manage to fulfill her calling as a writer or accomplish anything else worthy of her Harvard degree. Meanwhile, Daniel's career as a first-year associate at a powerful law firm is going so well she hardly sees him. The most exciting aspect of the new bride's life is her handsome next-door neighbor, a writer himself and seemingly a kindred spirit. The reappearance of an old school friend—a southern belle bombshell in hot pursuit of all eligible bachelors and potential real estate clients—only adds to Caroline's problems. In her desperation to forge an identity wholly her own, Caroline accepts an unexpected job offer from the University of Alabama in Tuscaloosa, forty-five minutes away from home. But just when she thinks she has succeeded in putting her personal and professional life together, her fragile new existence falls inexplicably apart.

Also featuring the return of larger-than-life Brook-Haven headmaster Norman Laney, The Harvard Bride is at once a social satire and a richly nuanced love story. Caroline's journey of self-discovery takes readers from the jeweled heart of Mountain Brook and Bama's sorority row, into James Agee's Hale County—from the inner sanctums of southern belles into the Deep South rural farmland, where slaves and sharecroppers once toiled. In the South the past often contains the keys to understanding the present and inspiring a better future. As Caroline travels into the heart of the Alabama darkness from which she came, she suddenly comes face to face with what she needs to build a life on her own terms in her native land, if she can summon the courage to make a difficult choice and take a huge risk.


Katherine Clark holds an A.B. degree in English from Harvard and a Ph.D. in English from Emory. She is the coauthor of the oral biographies Motherwit: An Alabama Midwife's Story, with Onnie Lee Logan, and Milking the Moon: A Southerner's Story of Life on This Planet, with Eugene Walter, a finalist for a National Book Critics Circle award. The Harvard Bride, the third in her series of Mountain Brook novels featuring Norman Laney and his students, is preceded by The Headmaster's Darlings and All the Governor's Men and will be followed by The Ex-suicide, forthcoming from the University of South Carolina Press's Story River Books, as is her oral biography of Pat Conroy. Clark lives on the Gulf Coast.

"In The Harvard Bride, Katherine Clark masterfully brings to life the colorful cast of Mountain Brook and peppers liberally with wedding drama. Through her carefully-drawn characters and tight plot twists, she simultaneously exposes the unsavory underbelly of Southern high-society and reveals gems of unexpected beauty. A fast and entertaining read!"—Nicole Seitz, author of The Cage-maker, The Inheritance of Beauty, and The Spirit of Sweetgrass

"Katherine Clark's newest treasure The Harvard Bride is a captivating tale of twentieth-century Alabama society. With a wry wit and keen eye for the most curious and conflicting details of southern life, Clark continues the story began in her earlier Mountain Brook novels with a complex portrait of Caroline Elmore, a newlywed native of the 'Tiny Kingdom' embarking on an adventure into the byzantine world of true-self and purpose. A beautiful, artful novel from a writer meant to share this story with us."—Patti Callahan Henry, author of The Idea of Love and The Stories We Tell

"An insider's guide to the drama of the debutante set and a perceptive look at the growing pains of a community attempting to change its deeply entrenched ways. A funny, gossipy look at a slice of the South through the eyes of an indelible character."—Kirkus Reviews