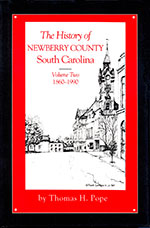 The population of Newberry County is fifty percent larger than it was in 1860 and the land area is slightly larger as a result of annexation. Although primarily an agricultural county, Newberry has exchanged its reliance on cotton as a cash crop for dependence on poultry and eggs, beef and dairy cattle, and timber and pulpwood. The county has lost some of its textile industry since World War II, but non-textile establishments hve moved in. These changes have diversified and stabilized Newberry's economy but have had little effect on the rural nature of the county.

This volume covers the political, social, and economic development of Newberry County, South Carolina, from the beginning of the Civil War to the present day.

Part One is devoted primarily to Newberry's political history, recounting its colorful leaders and their activities. Part Two covers its social and economic development, with chapters on agriculture, education, the courts, public health, churches, and business community, and editors and authors. Additional chapters are devoted to professions and include biographical sketches of lawyers, physicians, and dentists, as well as farmers, merchants, and businessmen.

Pope provides a detailed survey of all aspects of life in Newberry county, and the variety and quantity of primary sources used is impressive. This local history makes available for the reader much biographical material which is not available elsewhere.