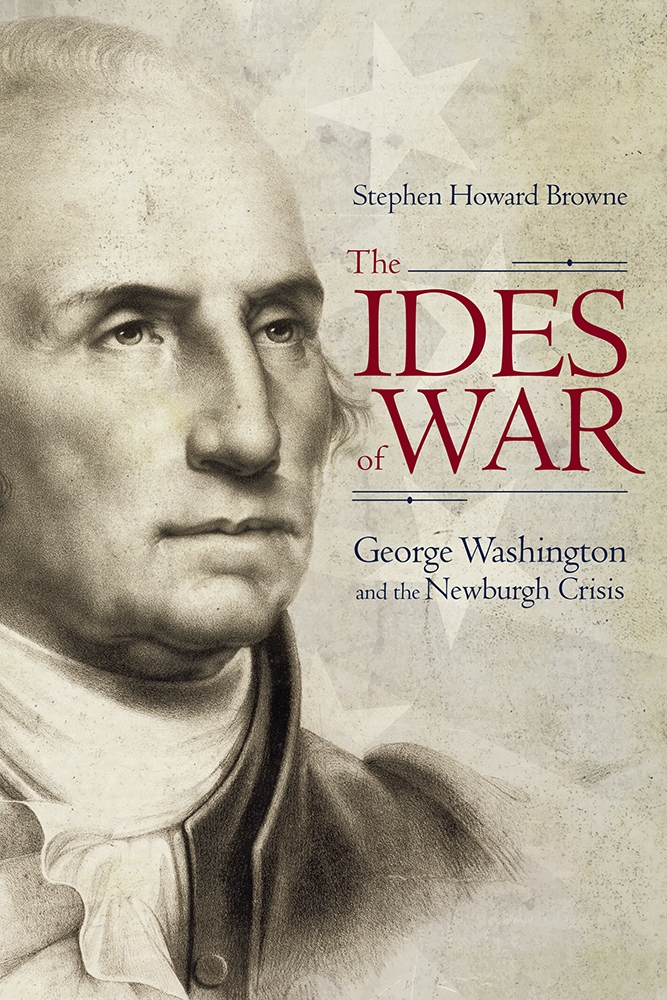 The Ides of War

George Washington and the Newburgh Crisis

History tells us that on a day when the forces of civil government confront the forces of military might, no one knows what may follow. Americans believe that they have avoided this moment, that whatever other challengesthe country has faced, at least it never has had to deal with the prospects of a coup d'état. Stephen Howard Brownemaintains that this view is mistaken, that in fact the United States faced such a crisis, at the very moment when thecountry announced its arrival on the world scene in the spring of 1783 in a rustic meeting hall along the Hudson River near Newburgh, New York. The crisis was resolved by George Washington, commander in chief of the U.S. Army, in an address he delivered to a roomful of restive and deeply disaffected officers.

In The Ides of War, Browneexamines the resolution of the first confrontation between the forces of American civil government and the American military—the Newburgh Crisis. He tells the story of what transpired on that day, examines what was said, and suggests what we might learn from the affair. Browne shows that George Washington's Newburgh Address is a stunning example of the power of human agency to broker one of our most persistent, mosttroublesome dilemmas: the rival claims to power of civil and military authorities. At stake in this story are biding questions about the meaning and legacy of revolution, the nature of republican government, and ultimately what kind of people we are and profess to be.

Browne holds that although these are monolithic and vexed themes, they are vital and need to be confronted to obtain a coherent and convincing account of history. The Newburgh Crisis offers an unmatched opportunity to examine these themes, as well as the role of rhetoric in the founding of the world's first modern republic.


Stephen Howard Browne is a professor of rhetorical studies in the Department of Communication Arts and Sciences at Pennsylvania State University. He is the author of Thomas Jefferson's Call for Nationhood: The First Inaugural Address; Angelina Grimké: Rhetoric, Identity, and the Radical Imagination; and Edmund Burke and the Discourse of Virtue. Browne has been named a distinguished scholar by the National Communication Association and recognized with its Diamond Anniversary Award. He is also the recipient of Penn State's Class of 1933 Award for Distinction in the Humanities.

"Few speeches have shaped the course of American history more than George Washington's address to his potentially mutinous officers in Newburgh, New York, on March 15, 1783. In this splendid book, Browne deftly brings to life the Newburgh conspiracy, Washington's masterful response to it, and the lasting implications of both for civil-military relations in a republican government."—Stephen Lucas, Evjue-Bascom Professor in the Humanities, University of Wisconsin

"This elegant and persuasive book expands our knowledge of a little known but hugely significant turning point in American history, one that set it on course toward liberty and democracy. In the process, Browne brings new understanding to the founding of the United States, its military system, and its first commander in chief."—Richard H. Kohn, professor emeritus of history and peace, war, and defense, University of North Carolina at Chapel Hill

"Browne demonstrates convincingly that George Washington, modest formal education aside, could be a powerful public speaker and that his Newburgh address of March 15, 1783, was a rhetorical masterpiece with profound meaning in assuring the formation of a freedom-loving republic in America."—James Kirby Martin, Cullen University Professor of History, University of Houston