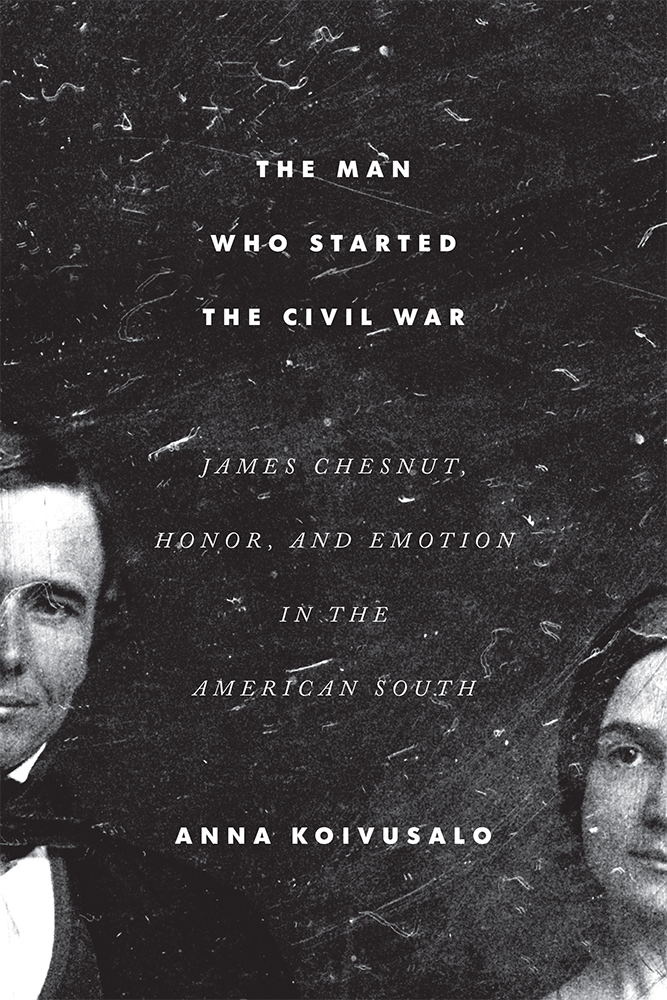 The Man Who Started the Civil War

James Chesnut, Honor, and Emotion in the American South

A fresh biography of a neglected figure in Southern history who played a pivotal role in the Civil War.

In the predawn hours of April 12, 1861, James Chesnut Jr. piloted a small skiff across the Charleston Harbor and delivered the fateful order to open fire on Fort Sumter—the first shots of the Civil War. In The Man Who Started the Civil War, Anna Koivusalo offers the first comprehensive biography of Chesnut and through him a history of honor and emotion in elite white southern culture. Koivusalo reveals the dynamic, and at times fragile, nature of these concepts as they were tested and transformed from the era of slavery through Reconstruction.

Best remembered as the husband of Mary Boykin Chesnut, author of A Diary from Dixie, James Chesnut served in the South Carolina legislature and as a US senator before becoming a leading figure in the South's secession from the Union. Koivusalo recounts how honor and emotion shaped Chesnut's life events and the decisions that culminated in the cataclysm of civil war. Challenging the traditional view of honor as a code, Koivusalo illuminates honor's vital but fickle role as a source for summoning, channeling, and expressing emotion in the nineteenth-century South.

"It is simultaneously a fine narrative of Chesnut's political journey from unionist to secessionist; a nuanced look at the cultural expectations Southern honor played in mapping that journey; and a deeply intimate study of the ways Chesnut tailored his emotions to navigate between 'raw' and 'honorable' expressions of Southern manhood. A fresh perspective long overdue."—John Mayfield, author of Counterfeit Gentlemen: Manhood and Honor in the Old South

"In this compelling study, Anna Koivusalo takes James Chesnut—South Carolina politician, secessionist, and Confederate officer—as a subject in his own right. No longer a lurker in the diary made famous by his wife Mary, James emerges as an actor whose efforts to manage his emotions by appealing to honor's dictates tells us a great deal about how mid-nineteenth century Americans experienced and understood their feelings. In so doing, The Man Who Started the Civil War offers new ways of thinking about questions that have long animated the field"—Sarah Gardner, Distinguished University Professor of History, Mercer University

"Anna Koivusalo has made a wholly original contribution to South Carolina history with the first full-length biography of James Chesnut, one of the state's most surprisingly neglected nineteenth-century luminaries. Moreover, by braiding the analysis of honor and emotion she has reinvigorated the study of southern honor and demonstrated the enduring value of emotions as a lens for historical analysis."—Michael E. Woods, Author of Arguing until Doomsday: Stephen Douglas, Jefferson Davis, and the Struggle for American Democracy

"Anna Koivusalo's book fairly bristles with exciting ideas about the intersection of honor and emotion across multiple planes in the Old South. Impressive research and innovative analysis yield a close understanding of the vexing, important South Carolina politician James Chesnut Jr. and the world that shaped him. This is a valuable, judicious biography and much more. The Man Who Started the Civil War advances the scholarly conversation on important problems with clarity and insight."—Lawrence McDonnell, Author of Performing Disunion: The Coming of the Civil War in Charleston, South Carolina

""Koivusalo brings Chesnut's lost world to life. Her work is academic in the best sense of the word: analytic, revelatory, and innovative. . . The Man Who Started the Civil War is, like its subject, a complex work that demands serious attention. Readers picking up the book with this frame of mind will be well rewarded.""—–Civil War Book Review