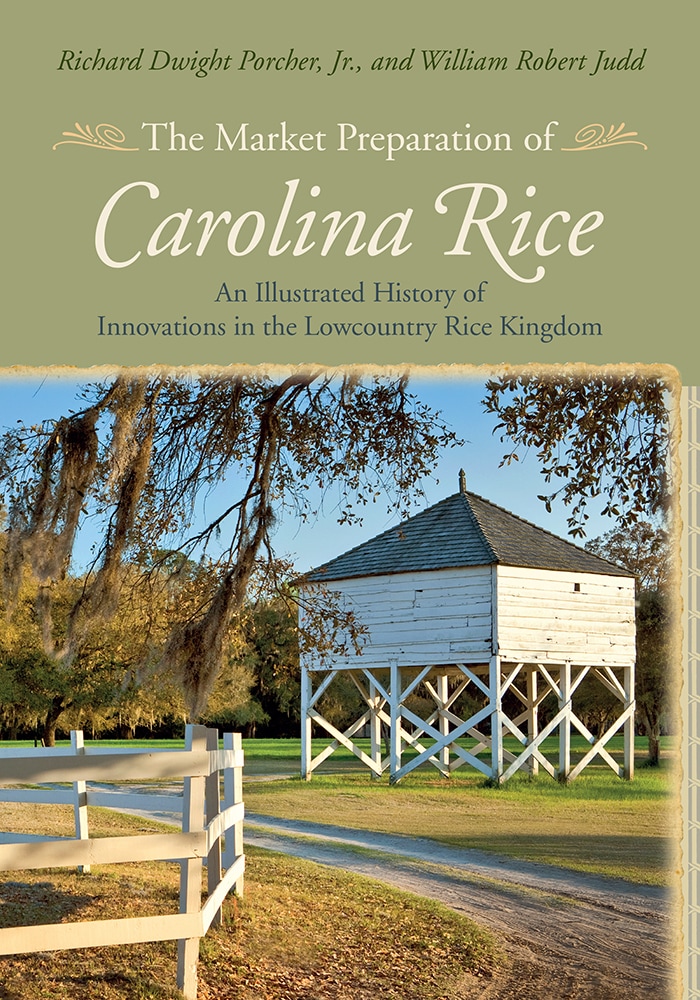 The Market Preparation of Carolina Rice

An Illustrated History of Innovations in the Lowcountry Rice Kingdom

Richard Dwight Porcher, Jr., eminent field biologist and lowcountry South Carolina native, has brought all of his skills as a botanist, historian, photographer, and conservationist to bear in a multidisciplinary study of the rice industry in South Carolina from its beginnings in the 1670s to its demise in the twentieth century. Using the tools of the geographer, civil engineer, draftsman and close readings of many primary and secondary sources on the history of rice culture in the colony and state, Porcher and coauthor William Robert Judd have amassed a great body of previously unknown information on rice history.

Detailed illustrations and descriptions of the implements and machines featuring technology used to prepare Carolina rice for overseas markets, The Market Preparation of Carolina Rice includes 161 illustrations, most of them meticulously hand-drafted by Judd expressly for this edition. The book begins with the preindustrial implements and techniques used by African and African American slaves and workers in the late 1600s and early 1700s and concludes with the water- and steam-powered machines that drove rice threshing and milling until the end of the industry in 1911. In great detail the authors reveal the immense, continually evolving technological innovations of an agricultural industry that spanned the Industrial Revolution and much of the history of the colony and state.

With this rich body of knowledge in hand, Porcher stands at odds with theories held by most historians of rice culture who generally assert that the plantation culture of rice was in unrecoverable decline as the South hastened to civil war. Porcher believes that decline was retarded by continuous technological innovation and increasing investment in land, labor, and mechanization as local planters sought to sustain profits in a globally expanding market. Porcher asserts that the post-Civil War loss of slave labor and destruction of infrastructure, a series of hurricanes, competition from rice grown in the American Southwest starting in 1880, and financial restraints that led to the cessation of rice culture in lowcountry South Carolina, North Carolina, and Georgia. Impoverished and unable to adapt to new technologies and market demands, rice planters left the commercial rice enterprise to others.


Richard Dwight Porcher, Jr., is professor emeritus at the Citadel and adjunct professor of biological sciences at Clemson University, where he established the Wade T. Batson Endowment in field botany. Porcher is the author of Wildflowers of the Carolina Lowcountry and Lower Pee Dee and the coauthor of A Guide to the Wildflowers of South Carolina (both published by the University of South Carolina Press) and The Story of Sea Island Cotton. Porcher serves as a trustee of the South Carolina Nature Conservancy and on the board of directors of the Charleston Library Society, the Waring Library, and the Carolina Gold Rice Foundation. He is the 2008 recipient of the South Carolina Environmental Awareness Award.

William Robert Judd, a self-taught draftsman/artist, archaeologist, and historian, is retired from the U.S. Space and Naval Warfare Systems Command (SPARWAR) and lives with his family on James Island, South Carolina.

"The discussion of technology, in terms of equipment and water flow technology is excellent."—L.S. Cline. Choice Connect

"Porcher and Judd have provided an excellent reference book . . . . All historians of the South, agriculture, and technology should have it on their shelves."—The Journal of Southern History

"This book goes far beyond market preparation of rice. Delving into the very beginnings of rice culture and assembling the latest knowledge on the origins of Carolina Gold rice, Porcher and Judd describe and illustrate the significance of rice and rice culture for one of the richest and most important periods of South Carolina history. Porcher and Judd spent countless hours examining ruins of rice mills on abandoned rice plantations. Their patience, perseverance and skills have paid off handsomely."—B. Merle Shepard, professor emeritus, Clemson University, and vice president, Carolina Gold Rice Foundation

"A masterpiece! This book will remain a classic and standard reference to the processing and culture that developed Carolina Gold Rice. Porcher's skilled writing, exhaustive research, passion for the subject and Judd's incredible renderings make this a book that deserves to be on the shelves of anyone interested in South Carolina History or Natural History. We cannot possibly understand the workings of the present day landscape without an intricate knowledge of the past and this book provides the solid standard on which to base our future studies."—Patrick D. McMillan, director, South Carolina Botanical Garden, and host of the Emmy-award winning nature program Expeditions with Patrick McMillan

". . . a well-executed study of the evolution of technology and the growth of one of America's staple industries."—The North Carolina Historical Review