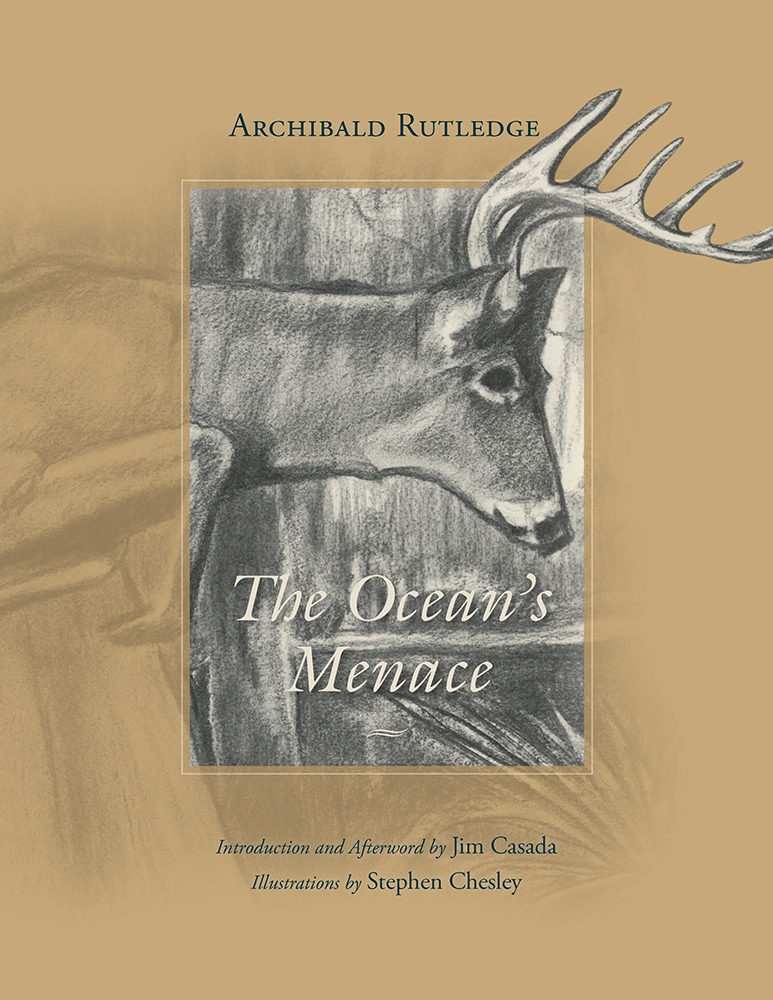 One of the more underappreciated aspects of Archibald Rutledge's varied and prolific literary efforts focuses on the way he could weave stories involving danger in the wilds. What he frequently described as chimeras—great sharks, alligators, rattlesnakes, and cottonmouths of incredible and often embellished dimensions, wild hogs with razor-sharp tusks, and more—clearly fascinated him. Similarly, he exhibited a knack for twists and turns in his tales reminiscent of O. Henry at his best.

The Ocean's Menace offers a fine example of this aspect of Rutledge as a creative writer. The title is misleading, because it immediately conjures images of something massive, such as a white shark, devilfish, whale, or other leviathan. Instead, "The Ocean" is a remote, treacherous tract of land near Hampton where hunters dared not venture and which locals viewed with a mixture of awe and alarm. It provides an ideal setting for this tale.

Rutledge was at his best when writing of whitetails, because deer hunting is woven as a bright thread through the entire fabric of his life. Here though, instead of yet another tale of a mighty stag or an antlered giant, the quarry proves to be the hunter's salvation. Delightfully told, with an abundance of twists and turns as the story unfolds, this is the sage of the Santee at his finest.

Jim Casada has written or edited more than forty books, contributed to many others, and authored some five thousand magazine articles. Casada has edited five Rutledge anthologies—Hunting and Home in the Southern Heartland, Tales of Whitetails, America's Greatest Game Bird, Carolina Christmas, and Bird Dog Days, Wingshooting Ways. A past president of the South Carolina Outdoor Writers Association, the Southeastern Outdoor Press Association, and the Outdoor Writers Association of America, Casada has been honored with more than 150 regional and national writing awards. He serves as editor at large for Sporting Classics magazine.

Stephen Chesley is a semiabstract artist working primarily in oils, charcoal, and metal. His work has been featured in solo and group exhibitions and has been honored with a fellowship from the National Endowment for the Arts. Chesley's previous collaborations with South Carolina Humanities were Archibald Rutledge's Claws, The Doom of Ravenswood, The Egret's Plume, and an illustrated chapbook edition of the Julia Peterkin short story "Ashes" in 2012.

"When I was a fifteen-year-old boy with burgeoning dreams of being a writer, my Beaufort High School English teacher Gene Norris introduced me to Archibald Rutledge at Hampton Plantation. Mr. Rutledge was the first professional writer I had ever met, and he was magnificent and generous and gracious. That day I learned what it should mean to be a writer and a teacher, and it shaped my life immeasurably. The University of South Carolina Press and the South Carolina Humanities are reprinting five short stories from Archibald Rutledge, not seen in print for a century, and enhancing them with exquisite original illustrations from South Carolina artist Stephen Chesley, a masterful introduction from Rutledge scholar Jim Casada, and new afterwords from some of today's finest outdoors writers. These books remind us of Mr. Rutledge's command of the English language, his great skills of observation of the natural world, and his fondness for distilling universal truths from stories of local essence. They also introduce new generations to the storyteller who was South Carolina's first poet laureate and perhaps its most prolific writer. It is good to have Mr. Rutledge with us once more."—Pat Conroy