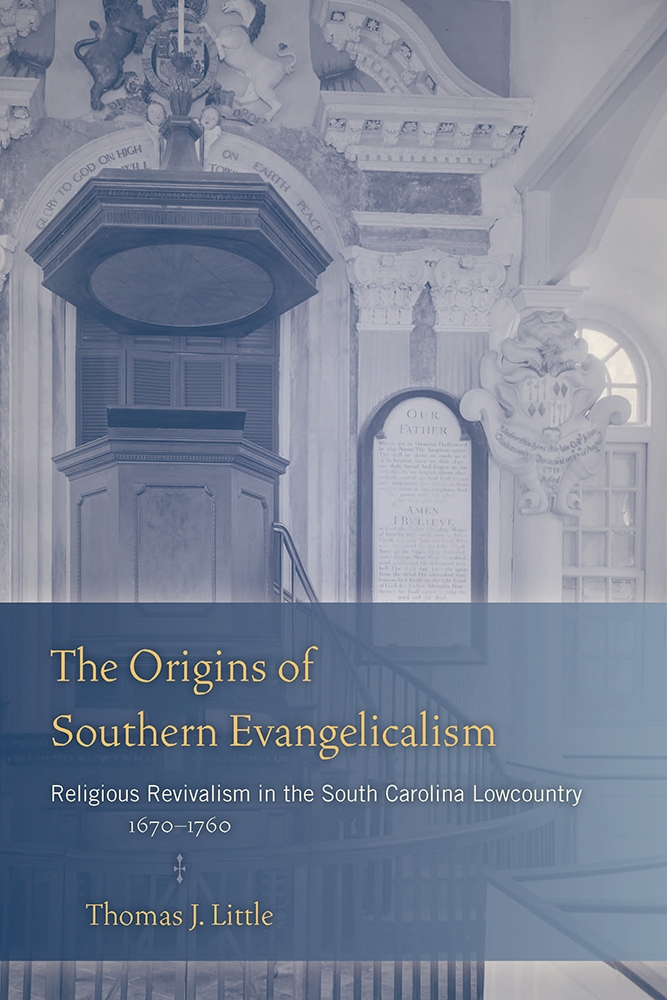 The Origins of Southern Evangelicalism

During the late seventeenth century, a heterogeneous mixture of Protestant settlers made their way to the South Carolina lowcountry from both the Old World and elsewhere in the New. Representing a hodgepodge of European religious traditions, they shaped the foundations of a new and distinct plantation society in the British-Atlantic world. The Lords Proprietors of Carolina made vigorous efforts to recruit Nonconformists to their overseas colony by granting settlers considerable freedom of religion and liberty of conscience. Codified in the Fundamental Constitutions of Carolina, this toleration ultimately attracted a substantial number of settlers of many and varying Christian denominations.

In The Origins of Southern Evangelicalism, Thomas J. Little refutes commonplace beliefs that South Carolina grew spiritually lethargic and indifferent to religion in the colonial era. Little argues that pluralism engendered religious renewal and revival, which developed further after Anglicans in the colony secured legal establishment for their church. The Carolina colony emerged at the fulcrum of an international Protestant awakening that embraced a more emotional, individualistic religious experience and helped to create a transatlantic evangelical movement in the mid-eighteenth century.

Offering new perspectives on both early American history and the religious history of the colonial South, The Origins of Southern Evangelicalism charts the regional spread of early evangelicalism in the too-often neglected South Carolina lowcountry—the economic and cultural center of the lower southern colonies. Although evangelical Christianity has long been and continues to be the dominant religion of the American South, historians have traditionally described it as a comparatively late-flowering development in British America. Reconstructing the history of religious revivalism in the lowcountry and placing the subject firmly within an Atlantic world context, Little demonstrates that evangelical Christianity had much earlier beginnings in prerevolutionary southern society than historians have traditionally recognized.


Thomas J. Little is an associate professor of history at Emory and Henry College in Emory, Virginia. His articles have appeared in Church History, Slavery and Abolition, and the South Carolina Historical Magazine. Little also contributed an essay on colonial South Carolina religious life to the groundbreaking volume Money, Trade, and Power: The Evolution of Colonial South Carolina's Plantation Society, published by the University of South Carolina Press.

"Evangelical Christianity's emergence in the lower South is surprisingly understudied, but Thomas Little's The Origins of Southern Evangelicalism goes a long way toward rectifying that neglect. His richly documented story of southern revivalism's beginnings represents a major contribution to our understanding of early American religion."—Thomas S. Kidd, Baylor University, author of The Great Awakening: The Roots of Evangelical Christianity in Colonial America

"This deeply researched and clearly written book persuasively challenges the existing scholarship on the rise of evangelical Christianity in the colonial South. By shifting his focus away from Virginia, Little shows that a vibrant and lasting evangelical subculture developed much earlier than generally recognized, decades before the Revolution. As an impressive example of revisionist history, the book deserves wide readership."—John B. Boles, Rice University

"The Origins of Southern Evangelicalism breaks new historical ground in its exploration of religious activity during South Carolina's first century of settlement. The author confirms what many have long suspected: the population of the colony was far more religious than it is often portrayed. In readable prose, Thomas J. Little explains the often confusing religious terms and movements of the 17th and 18th centuries. It is a most welcome addition to my bookshelf."—Walter Edgar, University of South Carolina