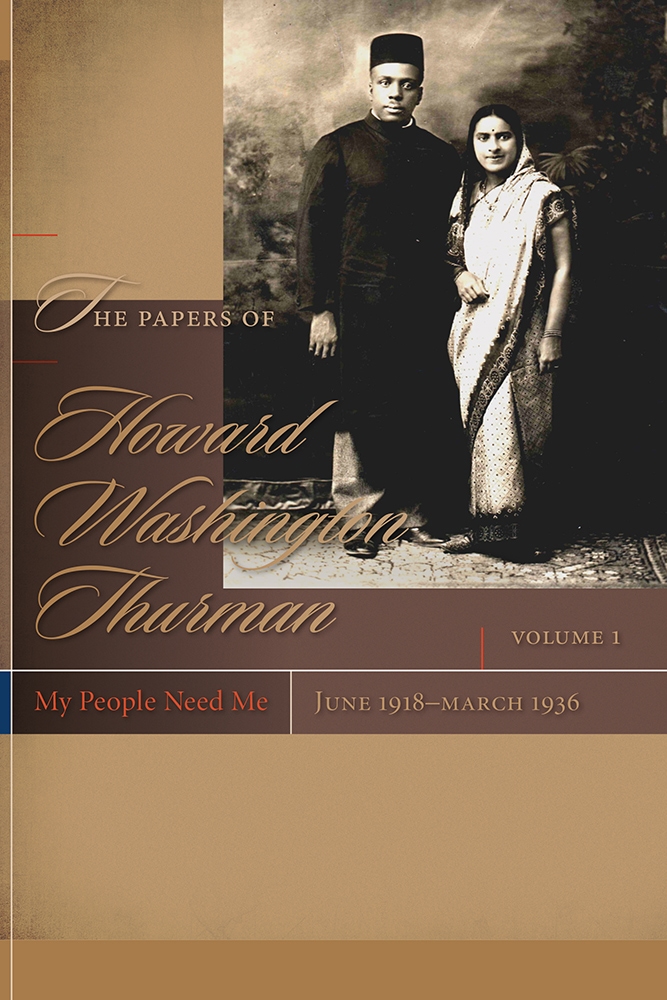 The Papers of Howard Washington Thurman is a five-volume, chronologically arranged documentary edition spanning the long and productive career of the Reverend Howard Thurman, one of the most significant leaders in the history of intellectual and religious life in the mid-twentieth-century United States. The first to lead a delegation of African Americans to meet personally with Mahatma Gandhi, in 1936, Thurman later became one of the principal architects of the modern, nonviolent civil rights movement and a key mentor to Martin Luther King, Jr. In 1953 Life magazine named Thurman as one of the twelve greatest preachers of the century.

The five volumes of this collection, culled from more than 58,000 documents from public and private sources, will feature more than 850 selections of Thurman's sermons, letters, essays, and other writings—many published here for the first time. Each volume will open with an editorial statement, followed by an introductory essay to guide the reader through the dominant themes in Thurman's thought: his understanding of spirituality and social transformations, his creative ecclesiology, and his conception of civic character and the national democratic experiment. Precise annotations to each document illumine Thurman's personal, professional, and intellectual development and place the texts into their historical context. The volumes are further augmented with detailed chronologies and representative illustrations.

Volume I (June 1918-March 1936) documents Thurman's early years in his native Daytona, Florida, his formal education and his leadership in the student movement, and his years at Howard University as a professor of philosophy and religion and dean of Rankin Chapel as well as his historic trip to India and meeting with Mahatma Gandhi in 1936. The texts, images, and editorial commentary presented here reveal the early development of the vision that drove Thurman's career as an educator, theologian, minister, and advocate for social justice and informed the twenty-three books that he began publishing in the mid-1940s. This volume provides rich insights into Thurman's thinking and spiritual growth and offers a window onto the landscape of the defining issues, events, movements, institutions, and individuals that shaped his formative years.

The texts presented here make for compelling reading, as Thurman's dialogue with the world of public theology is the story of a nation that was taking stock of its political and religious heritage. The historic publication of his collected papers will make an invaluable contribution not only to American intellectual history and to the history of religion, but to "America in Search of a Soul," as Thurman titled one of his sermons.

This documentary edition is made possible through the efforts of the Howard Thurman Papers Project, a division of the Leadership Center at Morehouse College in Atlanta. This project is funded through support from the Lilly Endowment, Inc.; the Henry Luce Foundation; the Pew Charitable Trusts, Inc.; and the National Historical Publications and Records Commission.


Walter Earl Fluker is the Coca-Cola Professor of Leadership Studies, professor of philosophy and religion, and executive director of the Leadership Center at Morehouse College. He is coeditor with Catherine Tumber of A Strange Freedom: The Best of Howard Thurman on Religious Experience and Public Life.

"An unprecedented account of one of the principal architects of the non-violent civil rights movement, the four-volume series The Papers of Howard Thurman offers the most complete portrayal of the religious leader and activist to date. The well-curated first volume exposes the decades of Thurman's thinking that preceded his first publication in 1922. The collection reveals Thurman's intellectual development and his milieu. It's consequential reading."—ForeWord Reviews