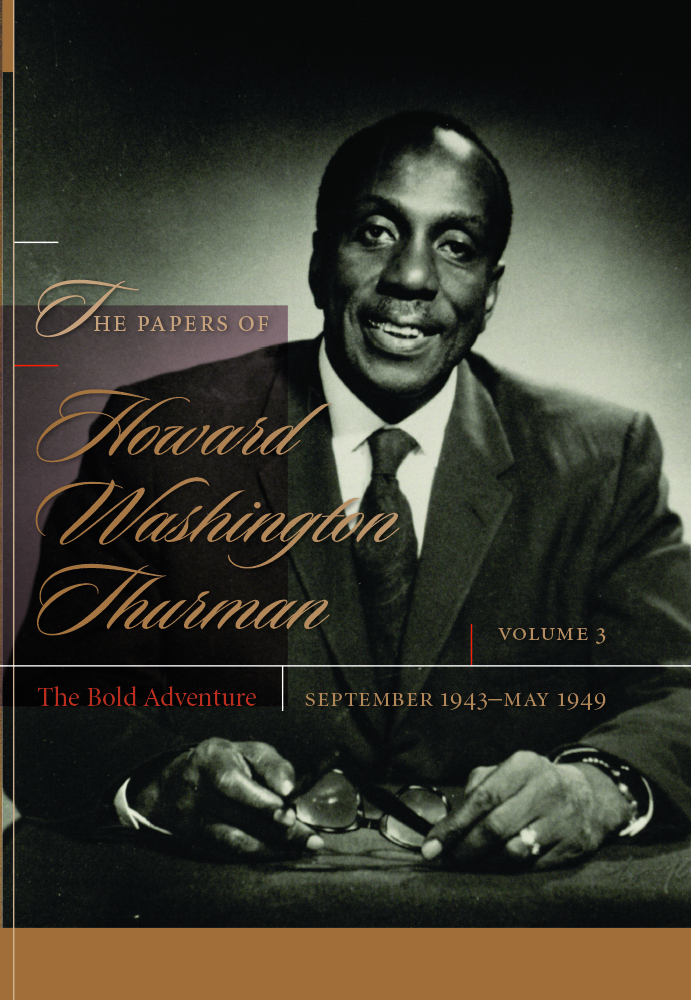 The Papers of Howard Washington Thurman is a multivolume, chronologically arranged documentary edition spanning the long and productive career of the Reverend Howard Thurman, one of the most significant leaders in the intellectual and religious life of United States in the mid-twentieth century. The first to lead a delegation of African Americans to meet with Mahatma Gandhi in 1936, Thurman later became one of the principal architects of the modern nonviolent civil rights movement and a key mentor to Dr. Martin Luther King, Jr. and others involved in the movement. In 1953 Life magazine named Thurman one of the twelve greatest preachers of the century.

In volume 3 (September 1943-May 1949), Walter Earl Fluker documents Thurman's founding and leadership of the Fellowship Church for All Peoples in San Francisco, California—the nation's first major interracial, interfaith church. The war years showed Thurman new possibilities and strains in American culture. He felt the war had led to a moral coarsening as evidenced by a willingness to accept things that had been intolerable in peacetime, an emphasis on destroying enemies—real and imagined—and the conviction that the only way to solve problems was through the use of force, a conviction that became a self-fulfilling prophecy. Amid the uncertainty of this period, Thurman embarked on his great interfaith experiment as pastor to a small group of dedicated and courageous people who were primarily middle class, with at least as many white as black people, in a city that in 1940s America was far from the mainstream of black life.

His letters, essays, and sermons show Thurman struggling to define and maintain the interracial character and practice of Fellowship Church, building its programs and membership while constantly wrestling with financial and location problems and preserving its separation from other organizations, most notably the Communist Party and its adult education program, the California Labor School. Thurman was also becoming more of a national figure, partly a result of the attention given to the Fellowship Church in publications such as Time magazine, but also because he had begun to publish regularly.

From his first book, The Greatest of These, it was only three years until his Ingersoll lecture at Harvard, "The Negro Spiritual Speaks of Life and Death," was offered by Harper. Two years later Thurman published what has proven his most enduring work, Jesus and the Disinherited, arguing that the key to understanding the religion of Jesus was his lack of Roman citizenship, a condition Thurman compared to the lives of southern black people, who, like Jesus, were effectively disinherited.


Walter Earl Fluker is the Martin Luther King, Jr. Professor of Ethical Leadership and the senior editor and director of the Howard Thurman Papers Project at Boston University. He is author of Ethical Leadership: The Quest for Character, Civility, and Community and They Looked for a City: A Comparative Analysis of the Ideal of Community in Howard Thurman and Martin Luther King, Jr. and coeditor with Catherine Tumber of A Strange Freedom: The Best of Howard Thurman on Religious Experience and Public Life.

"On the whole, this fine text arrives at a moment when the political pervasiveness of psychological dynamics that Thurman once famously described as 'the hounds of hell'. . . potentially lend themselves to stark authoritarianism in the United States."—The Journal of Southern History

"Covering the period when Thurman challenged segregation's great high wall of separateness by helping launch the interracial Fellowship Church as co-pastor with Albert Fisk and the ending of World War II, volume 3 is a splendid window into Thurman's relentless quest for racial equality and genuine democracy."—Emilie M. Townes, E. Rhodes and Leona B. Carpenter Professor of Womanist Ethics and Society, Vanderbilt Divinity School