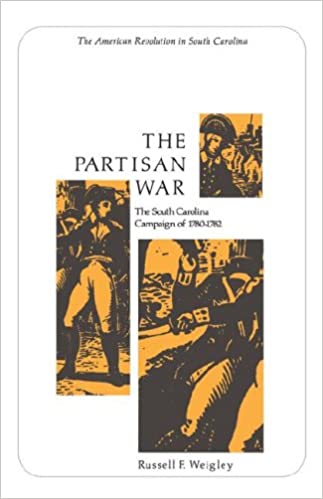 The American Revolution is most often identified by the famous battles in the northern states, but roughly eighty percent of the war was fought in the South. The Partisan War examines the details of the southern campaign of the Continental army from 1780 to 1782 under the command of General Nathanael Greene, who employed the support of South Carolina backcountry men who often engaged in "partisan warfare"—what later generations would refer to as irregular or guerilla tactics.

In this concise volume, author Russell F. Weigley traces the course of the war in South Carolina from the fall of Charleston in 1780, to the Battle of Eutaw Springs and the end of effective British military operations in the South Carolina interior in 1781, and finally to the British surrender and evacuation of Charleston in 1782. Along the way Weigley also details the battles of Camden, King's Mountain, and Cowpens, as well as many of the small engagements and skirmishes that comprised much of the war in the South. He also introduces readers to famed partisan leaders Thomas Sumter and Francis Marion. Readers will emerge with a clearer sense of the significance of South Carolina's role in the American Revolution and the intensity of the fighting that took place there.

Russell Frank Weigley, was Distinguished University Professor of History at Temple University in Philadelphia, Pennsylvania, and a noted military historian. His research and teaching interests centered on American and world military history, World War II, and the American Civil War. One of Weigley's most widely received contributions to research is his hypothesis of a specifically American Way of War, i.e. an approach to strategy and military operations, that, while not predetermined, is distinct to the United States because of cultural and historical constraints.

". . . a splendid addition to the Tricentennial Booklet series. . . . offers provocative opinions on the struggle that raged through the Carolina back country in the early 1780's. . . . Professor Weigley has broadened our outlook and challenged us to reexamine our conception of the Revolution in South Carolina."—South Carolina Historical Magazine

"An exciting examination of a comparatively little known episode in the American Revolution. Weigley, an American military historian, boldly states his theme in the introduction: in this era when unconventional or guerilla war commands such an interest, it is instructive to view the South Carolina campaign against the British troops as an example of guerilla war. . . . Because of his skillful writing and brilliant analysis, Weigley has written a book for a wide audience. Quotations from Giap and Mao Tse-tung enliven his comparisons. Brief, with no footnotes, but a selective bibliography, highly original, Weigley's booklet is an excellent introduction to the military history of the American Revolution."—Choice