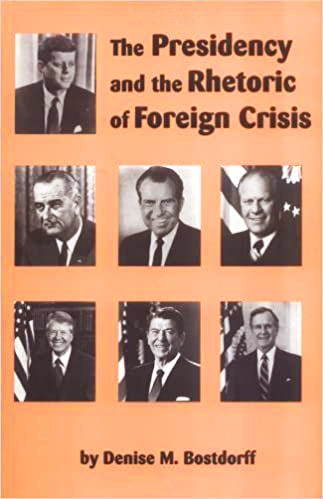 The Presidency and the Rhetoric of Foreign Crisis

The Presidency and the Rhetoric of Foreign Crisis examines presidential crisis management—or the way U.S. presidents portray foreign crises to the American public—as a potent tool for the accumulation, and at times the forfeiture, of political power. Arguing that it is largely through presidential communication that foreign crises become "real" for American citizens, Bostdorff does not claim that presidents fabricate crises but rather that they vigorously advance their version of the crisis to the American public in order to rally support for their foreign policies. Bostdorff contends that presidential language can heighten the significance of events that otherwise would attract little public attention—such as a coup on the tiny Caribbean island of Grenada—and thereby persuade citizens to support U.S. military intervention and to view the commander in chief as a decisive, victorious leader.

To prove her assertions, Bostdorff presents case studies from six successive administrations. Beginning with Kennedy and the Cuban missile crisis of 1962, she examines Johnson and the Gulf of Tonkin, Nixon and Cambodia, Ford and the Mayaguez, Carter and Iran, and Reagan and Grenada. Concluding with an evaluation of Bush and Panama, Bostdorff identifies the recurring themes that defined crisis rhetoric, explains how that rhetoric encourages particular public reactions, and raises disturbing questions about the implications for the American polity.

Denise M. Bostdorff is assistant professor of communication at Purdue University, where she conducts research and teaches courses in rhetorical criticism, political communication, and public affairs/issue management. Her essays have appeared in Communication Studies, Presidential Studies Quarterly, Quarterly Journal of Speech, and Western Journal of Communication.

"Has the potential of becoming the most important study of presidential foreign crisis rhetoric.... An excellent piece of scholarship."—Kurt Ritter, Texas A&M University