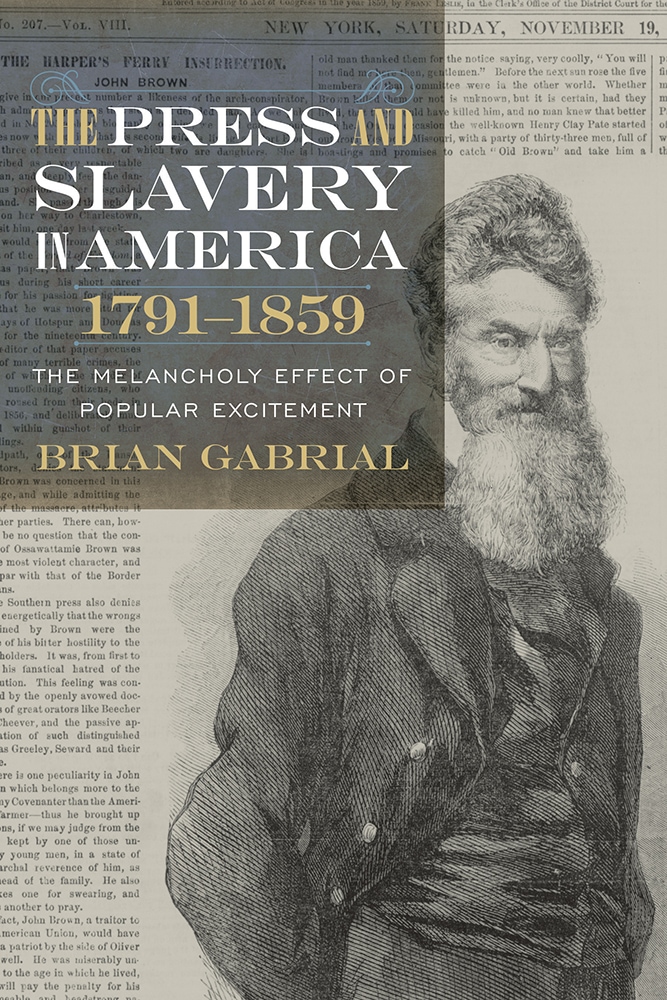 The Melancholy Effect of Popular Excitement

Slavery remains one of the United States' most troubling failings and its complexities have shaped American ideas about race, economics, politics, and the press since the first days of settlement. Brian Gabrial's The Press and Slavery in America, 1791-1859 examines those intersections at times when the nation and the institution of slavery were most stressed, namely when slavesrevolted or conspired to revolt. Such events frightened white, slave-owning society to its core and forced public discussions about slavery at times when supporters of the peculiar institution preferred them to be silent. Gabrial closely reads the mainstream press during the antebellum years, identifying shifts in public opinion about slavery and changes in popular constructions of slaves and other black Americans, a group voiceless and nearly invisible in the nation's major newspapers. He reveals how political intransigence rooted in racism and economics set the country on a perilous trajectory toward rebellion and self-destruction.

What the nineteenth century press reveals in this book are discourses—ways of thinking and expression—that have retained resonance in contemporary race relations and American politics. They connect to ideas about the press and technology, changing journalistic practice, and, importantly, the destruction wrought by the dysfunction of the nation's political parties.


Brian Gabrial is an associate professor and chair of the Department of Journalism at Concordia University in Montreal, Canada. He earned his Ph.D. in mass communication from the University of Minnesota. Previously Gabrial worked as a television newscast and field producer for the ABC and NBC affiliates in Minneapolis–St. Paul, Minnesota, and Omaha, Nebraska. He also edited and wrote for a small, monthly newspaper, the American Citizen Press, in Omaha. Gabrial has been published in journals such as American Journalism, Journalism History, and Canadian Journal of Communication.

"With its carefully developed analytical framework and fine-grained examination of antebellum news. . . Gabrial's book is a pointed reminder that the United States was founded upon a racial paradox."—Journalism & Mass Communications Quarterly

"Gabrial successfully shows how the news media of the 19th century shaped national and local understandings of slavery, racial ideologies, and resistance to human bondage by both black slaves and white and black abolitionists. This is an important book that crosses disciplinary boundaries, informing scholars of slavery and journalism about how their fields interacted."—Paul Finkelman, Ariel F. Sallows Visiting Professor of Human Rights Law, University of Saskatchewan College of Law and Senior Fellow, University of Pennsylvania Program on Democracy, Citizenship, and Constitutionalism

"Gabrial illustrates the evolution of the conflict between abolitionists and slavery supporters by analyzing the increasing media coverage of events...this book is a signal contribution to the quest for answers about slavery in the United States."—The Journal of Southern History