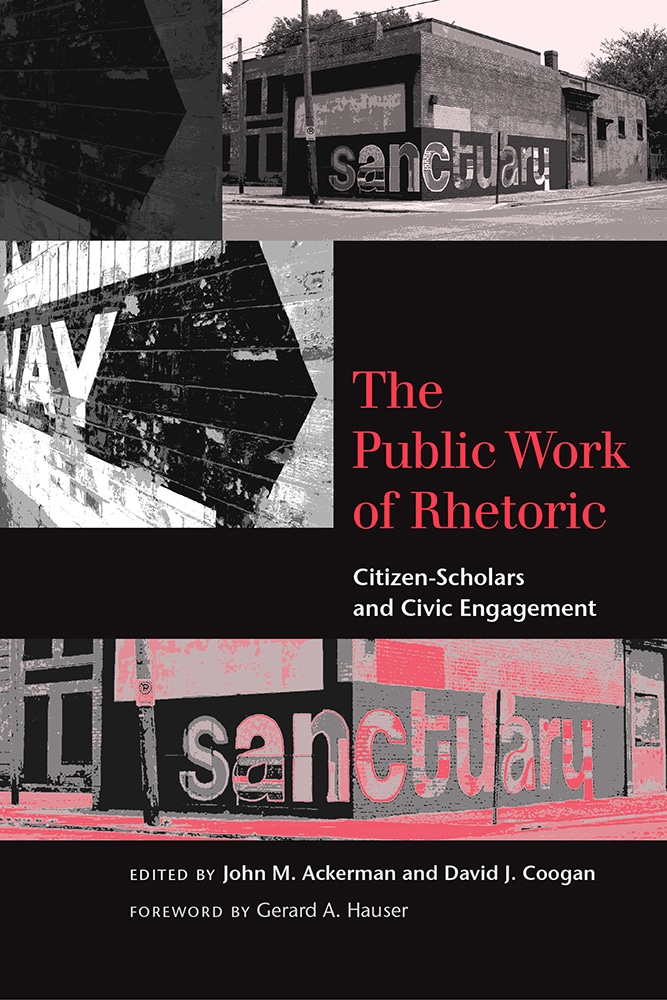 The Public Work of Rhetoric

The Public Work of Rhetoric presents the art of rhetorical techné as a contemporary praxis for civic engagement and social change, which is necessarily inclusive of people inside and outside the academy. In this provocative call to action, editors John M. Ackerman and David J. Coogan, along with seventeen other accomplished contributors, offer case studies and criticism on the rhetorical practices of citizen-scholars pursuing democratic ideals in diverse civic communities—with partnerships across a range of media, institutions, exigencies, and discourses.

Challenging conventional research methodologies and the traditional insularity of higher education, these essays argue that civic engagement as a rhetorical act requires critical attention to our notoriously veiled identity in public life, to our uneasy affiliation with democracy as a public virtue, and to the transcendent powers of discourse and ideology. This can be accomplished, the contributors argue, by building on the compatible traditions of materialist rhetoric and community literacy, two vestiges of rhetoric's dual citizenship in the fields of communication and English. This approach expresses a collective desire in rhetoric for more politically responsive scholarship, more visible impact in public life, and more access to the critical spaces between universities and their communities.

The compelling case studies in The Public Work of Rhetoric are located in inner-urban and postindustrial communities where poverty is the overriding concern, in afterschool and extracurricular alternatives that offer new routes to literate achievement, in new media and digital representations of ethnic cultures designed to promote chosen identities, in neighborhoods and scientific laboratories where race is the dominant value, and in the policy borderlands between universities and the communities they serve. Through these studies and accounts, the contributors champion the notion that the public work of rhetoric is the tough labor of gaining access and trust, learning the codes and histories of communities, locating the situations in which rhetorical expertise is most effective, and in many cases jointly defining the terms for gauging social change.


"This collection of essays raises fundamental questions about the mission and methods of rhetorical studies. The essays should be read and discussed widely by all concerned with the social role of our field."—Rhetoric Review

"The essays in this collection report lively, inventive, intelligent, and engaged responses to the Republic's need for capacitated citizens. They offer impressive studies of how we enter into public problems in our communities, how rhetoric has constituted counterpublics among the underclass, how rhetoric's performative power can serve liberatory ends, how the community can be a resource that is an invaluable resource for the civic education of our students. It is the place where democracy comes alive in the rhetorical practices of the students and those outside the university whom they engage. The work reported in this volume is noble and important not only for rhetoric studies, not only for rhetoric and composition pedagogy, but as a vision of what higher education might aspire to that goes beyond preparing students to earn a living. They are models of how we might prepare them to make a difference."—Gerard A. Hauser, from the foreword, College Professor of Distinction in the Department of Communication at the University of Colorado Boulder