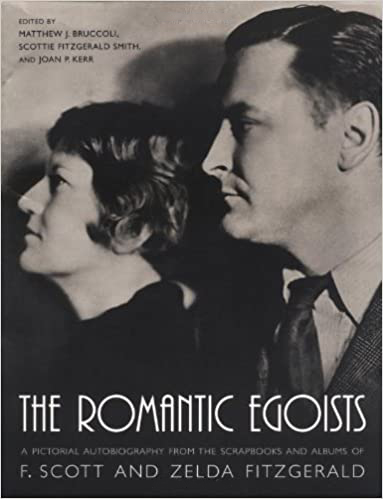 A Pictorial Autobiography from the Scrapbooks and Albums of F. Scott and Zelda Fitzgerald

A most intriguing perspective on a legendary literary couple

This pictorial autobiography of Scott and Zelda Fitzgerald documents two lives that have become legendary. The Romantic Egoists draws almost entirely from the scrapbooks and photograph albums that the Fitzgeralds scrupulously kept as their personal record and provides a wealth of illustrative material not previously available.

In a unique way this book gives Scott and Zelda Fitzgerald's own story. The variety is surprising: Fitzgerald's thoughts about his early loves in St. Paul, Minnesota; a photograph of the country club in Montgomery, Alabama, where the two met; reviews of This Side of Paradise; poems to the couple from Ring Lardner; snapshots of their trips abroad; Fitzgerald's careful accounting of his earnings; a photograph of the house on Long Island where The Great Gatsby was conceived; postcards with Fitzgerald's drawings for his daughter. These rare photos and memorabilia combine into a narrative augmented by selections from Scott's and Zelda's own writings, conveying the spirit of particular moments in their lives. As Scottie Fitzgerald Smith writes in her introduction, "We've tried hard to balance the literary with the personal, and the familiar with the more obscure . . . to make it their book, rather than a book about them."

Scottie Fitzgerald Smith (1921–1986) was the only child of F. Scott and Zelda Fitzgerald. She worked on the staffs of Time and the New Yorker and wrote for the New York Times and the Washington Post. Smith considered The Romantic Egoists her ultimate tribute to her parents.

The late Joan P. Kerr (1921–1996), a founding editor of American Heritage magazine, was a specialist in American art and photography.

"The book is irresistible, a narrative with a strange eloquence"—New York Times Book Review

"The title says it all, yet for lovers of The Great Gatsby, this is the ultimate book. From Scott's baby book to the Fitzgeralds' joint gravestone, this book is a remarkably complete pictorial record: telegrams, book jackets, bar bills, publishing statements, newspaper clippings, paintings by Zelda. . ., and endless photographs of the Fitzgeralds as they moved from the flaming flappers of Princeton and Montgomery, Alabama, to the desperate boozers of Hollywood."—Los Angeles Times

"Funny and sad, comic and tragic, this exceptional collection supplements the works by Mizener, Turnbull, and Milford, but is oddly more powerful than any book on the Fitzgeralds. A most interesting and fascinating book."—Library Journal