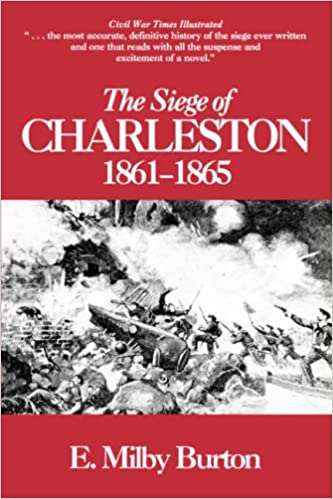 On April 12, 1861, Fort Sumter was fired on by the Confederate batteries located around the Charleston Harbor. Within thirty-four hours, the fort had surrendered. From that moment on, the recapturing of Fort Sumter became one of the Union's most important objectives. Nearly four years elapsed before the Northern forces were successful. The Siege of Charleston provides the complete history of those four important years in the history of the Civil War.

E. Milby Burton (1898–1977) was director of the Charleston Museum for forty years. His articles appeared in the Magazine Antiques and the New York Times, and his books include South Carolina Silversmiths and Charleston Furniture, 1700–1825.

"Burton's book will appeal to armchair tacticians interested in ironclads, torpedoes, submarines, and stories of 'courage and honor.' Historians familiar with the major events of the Civil War will welcome this comprehensive and generously documented book."—Journal of American History

"The author, the director of the Charleston Museum and a retired naval officer, has brought together, mainly from original sources, more information on the siege than is to be found elsewhere."—American Historical Review

"The siege of Charleston is a rather remarkable event in the history of warfare. Few operations have lasted longer (587 days) and few have involved so many different kinds of warfare."—Florida Historical Quarterly

"No one interested in the Civil War or South Carolina history will want to miss this one."—Augusta Chronicle

"The book belongs in t he library of anyone interested in the story of our country and the people who made it."—The News and Courier (Charleston)