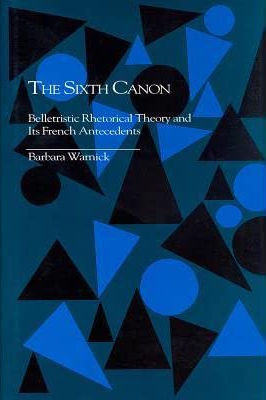 In the eighteenth century, Scottish rhetoricians Hugh Blair, Adam Smith, and George Campbell were intrigued more by the ways in which discourse appealed to an audience's taste and sense of propriety than by its reasoning. To explore the rhetorical dimensions of aesthetic influence, Blair, Smith, and Campbell looked to seventeenth-century views of beauty, novelty, and "the Sublime." In The Sixth Canon, Barbara Warnick explains how the influence of French belletrists affected a shift in emphasis from neoclassical invention to aesthetics, thereby altering the traditional five-canon model of rhetoric and initiating a revised conception of rhetoric in the modern period.

Warnick traces the influence of Cartesian psycho-physiology and British empiricism on British rhetoricians of the late eighteenth-century. She explains the view that people are persuaded more by discourse that reflects social convention and emotive experience than they are by logical argument. Warnick concludes by arguing that the much-studied texts of Bernard Lamy, François Fénelon, Charles Rollin, Hugh Blair, Adam Smith, and George Campbell should be examined anew, in terms of psychology and aesthetics rather than in the traditional context of the five-canon model.

Barbara Warnick is associate professor of speech communication and graduate program coordinator at the University of Washington. She is translator of the 1984 edition of Fénelon's Letter to the French Academy.

"An invigorating reassessment of what is belletristic about eighteenth-century belletristic rhetorics."—Thomas M. Carr, Jr., University of Nebraska-Lincoln.

"Carries [the study of] eighteenth-century rhetoric a step beyond prior analysis of rhetoric in the Age of Reason."—Vincent Bevilacqua, University of Massachusetts-Amherst