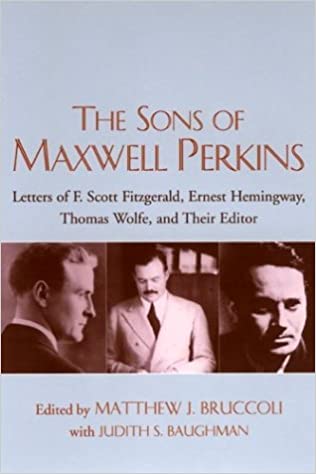 The Sons of Maxwell Perkins

In April 1938 F. Scott Fitzgerald wrote to his editor Maxwell Perkins, "What a time you've had with your sons, Max—Ernest gone to Spain, me gone to Hollywood, Tom Wolfe reverting to an artistic hill-billy." As the sole literary editor with name recognition among students of American literature, Perkins remains permanently linked to Fitzgerald, Hemingway, and Wolfe in literary history and literary myth. Their relationships, which were largely epistolary, play out in the 221 letters Matthew J. Bruccoli has assembled in this volume. The collection documents the extent of the fatherly forbearance, attention, and encouragement the legendary Scribners editor gave to his authorial sons. The correspondence portrays his ability to juggle the requirements of his three geniuses.

Perkins wanted his stars to be close friends and wrote to each of them about the others. They responded in kind: Fitzgerald on Hemingway and Wolfe, Wolfe on Fitzgerald, Hemingway on Wolfe and Fitzgerald. The novelists also wrote to each other. But contrary to Perkins's hopes for a brotherhood among them, their letters express rivalry and suspicion rather than affinity. Perkins encouraged the writers professionally but never took sides in their sibling rivalries.

Addressing an overlooked aspect of literary study, the letters center on the acts of writing, editing, and publishing, and on the writers' relationships with Scribners and one another. In addition to providing insight into the personalities of these literary heroes, the correspondence reveals how editing and publishing have changed since the twenties and thirties—a golden era for Scribners and for American literature. In particular, the letters correct the incomplete, oversimplified popular image of Perkins and his function as an editor—especially his relationship with Thomas Wolfe.

Judith S. Baughman is the author of F. Scott Fitzgerald in the series Literary Masters and a coeditor of books about Fitzgerald. She also lives in Columbia.

"Matthew J. Bruccoli and Judith Baughman have performed a marvelous act of scholarship with their book on the great American editor Maxwell Perkins and his three great American novelist 'sons.' It is compulsively and page-turningly readable, right down to the perfect footnotes."—Christopher Buckley