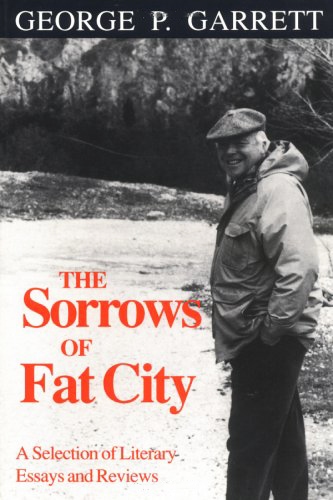 The Sorrows of Fat City

A Selection of Literary Essays and Reviews

The Sorrows of Fat City is a representative sampling of critical literary essays written by George Garrett and published between 1957 and 1990. One of America's most accomplished and highly acclaimed writers, poet and novelist Garrett has been writing book reviews and critical essays since the outset of his career. In this volume, he treats several subjects including the Elizabethans, writers who have influenced him, the work of William Faulkner, Southern literature, and contemporary writers.

George Garrett is the Henry Hoyns Professor of Creative Writing at the University of Virginia. He received his Ph.D. from Princeton University and has served as writer in residence, professor of English, and lecturer at numerous universitites and colleges throughout his career. A prolific writer, Garrett has published several novels, collections of short stories and poetry, plays, a biography, and a critical study. Included among his previous publications are Entered from the Sun, Death of the Fox, Poison Pen, Understanding Mary Lee Settle, and An Evening Performance.