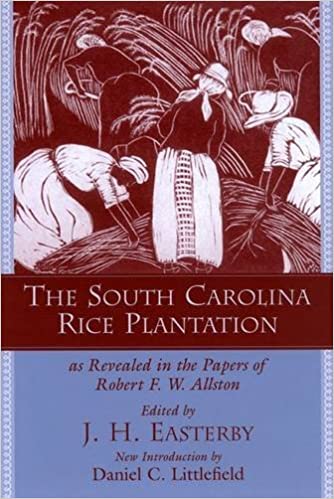 As Revealed in the Papers of Robert F. W. Allston

The reissue of The South Carolina Rice Plantation as Revealed in the Papers of Robert F. W. Allston makes available for a new generation of readers a firsthand look at one of South Carolina's most influential antebellum dynasties and the institutions of slavery and plantation agriculture upon which it was built. Often cited by historians, Robert F. W. Allston's letters, speeches, receipts, and ledger entries chronicle both the heyday of the rice industry and its precipitate crash during the Civil War. As Daniel C. Littlefield underscores in his introduction to the new edition, these papers are significant not only because of Allston's position at the apex of planter society but also because his views represented those of the rice planter elite.

Allston (1801-1864) owned or managed seven plantations along the Pee Dee and Waccamaw rivers, including Chicora Wood, Rose Bank, and Brookgreen, now known as Brookgreen Gardens. A Jeffersonian republican, he served in the South Carolina General Assembly from 1832 until he was elected governor in 1856. After his death in 1864, his daughter Elizabeth Allston Pringle continued the family's rice-growing activities and achieved personal renown as a columnist for the New York Times and author of A Woman Rice Planter.

The collection includes letters between Allston and his wife and children, correspondence with politicians, fiscal documents from the operation of his plantations, records related to the sale and care of slaves, and political speeches.


The late J. H. Easterby (1898–1960) taught history at the College of Charleston. He served as the director of the South Carolina Department of Archives and History from 1949 until 1960.