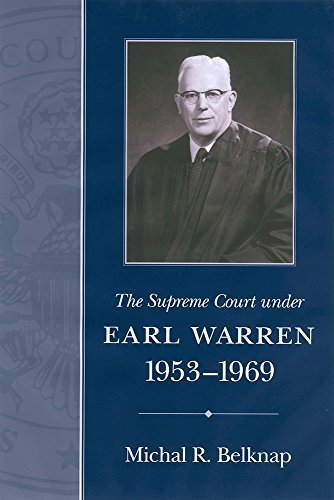 A thorough study of the many Warren Court issues and decisions—school desegregation, separation of church and state, freedom of expression—that remain controversial to this day

In The Supreme Court under Earl Warren, 1953-1969, Michal Belknap recounts the eventful history of the Warren Court. Chief Justice Earl Warren's sixteen years on the bench were among the most dramatic, productive, and controversial in the history of the Supreme Court. Warren's tenure saw the Court render decisions that are still hotly debated today. Its rulings addressed such issues as school desegregation, separation of church and state, and freedom of expression.

In 1954 Warren and his colleagues struck down school segregation as unconstitutional. They then participated in a broad campaign to win equal rights for African Americans. While it cautiously dismantled McCarthy-era infringements on civil liberties, the Warren Court boldly expanded freedom of expression in other areas. Frankly using constitutional law as a tool to promote political and social reform, the Warren Court revolutionized criminal procedure and mandated an end to the malapportionment of state legislatures and other representative institutions. It both invented and constitutionally guaranteed individuals' rights to privacy with respect to sexual matters. Its rulings did much to advance the agenda of the liberal reformers who dominated American politics during the 1960s. But these rulings also angered many Americans, who accused the Warren Court of running God out of the public schools, handcuffing the police, and flooding the country with smut.

Although it staggered to an end in 1969 amid controversy and scandal, the Warren Court revolutionized constitutional law. In the entire history of the Supreme Court, only John Marshall's tenure can compare with Warren's in respect to the significance of its decisions and its impact on the development of American constitutional law. No other Court has had greater impact on American culture and mores than that of Earl Warren.

Drawing on internal memoranda as well as published opinions of the justices, Belknap reveals the philosophical debates and personality conflicts behind the Court's decisions. He also assesses the overall accomplishments and failures of the Warren Court and places them in both their political and social contexts.


Michal R. Belknap teaches constitutional law, criminal law, and American legal history at California Western School of Law in San Diego. He is also an adjunct professor of American history at the University of California, San Diego. His areas of expertise are twentieth-century civil rights and civil liberties and the interrelationship between law and politics. Belknap is the author or editor of seven books including Cold War Political Justice: The Smith Act, the Communist Party, and American Civil Liberties; Federal Law and Southern Order: Racial Violence and Constitutional Conflict in the Post-Brown South; American Political Trials; and The Vietnam War on Trial: The My Lai Massacre and the Court-Martial of Lieutenant Calley. Belknap lives in San Diego.

"From civil right to religious expression, due process to free speech, the rulings of the Warren Court, while indicative of the liberal idealism of the 1960s, continue to affect and protect American liberties today. Through his thoughtful analysis and adroit research, Michal R. Belknap proffers a vivid retelling of an era that showed us how the highest court in the land could truly serve as an instrument for social change."—William E. Nelson, Judge Edward Weinfeld Professor of Law, New York University School of Law, and author of The Fourteenth Amendment: From Political Principle to Judicial Doctrine

"In a brilliant synthesis, Belknap shows the Warren Court in all its complexity, rebutting both those who would demonize it as well as those who would canonize it. It is far and away the best single volume we have on the Warren Court, its accomplishments, and its legacy of judicial activism."—Melvin I. Urofsky, Virginia Commonwealth University, and author of 100 Americans Making Constitutional History