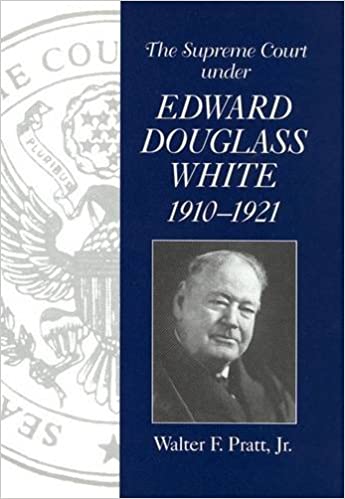 The Supreme Court under Edward Douglass White, 1910-1921 chronicles a transformation in American jurisprudence that mirrored the widespread political, economic, and social upheavals of the early twentieth century. Edward Douglass White's tenure as chief justice coincided with an onslaught of changes in the life of the country, including a rapid shift from a rural to an urban society, the emergence of the United States as a world power, and the enactment of Populist and Progressive reforms. In this volume Walter F. Pratt, Jr., recounts the Court's rulings of the era and draws particular attention to its unique struggle in redefining legal vocabulary. Pratt shows that the Court found itself in the midst of an era when the legal meaning of words had to shift in order to deal with fundamental changes in society and government.

Eschewing the usual topic-based approach to judicial history, Pratt relies on a chronological review of the Court's rulings. He draws upon the business within each term to document the institution's evolution—from strict deductive formalism to studied inductive reasoning to an accelerated rate of word change after the 1916 appointment of Justice Louis D. Brandeis. Pratt finds that the justices' linguistic grappling cut across generational lines, with senior justices Oliver Wendell Holmes and Joseph McKenna joining the younger Brandeis in forging fresh methods of analysis.

Looking beyond the legal issues confronted by the Court, Pratt examines White's efforts to maintain collegiality among the justices, his refusal to use his office to support needed changes in the Court's jurisdiction, and his hesitant guidance of the institution into uncharted legal and constitutional territory. Pratt concludes that White's style of leadership ultimately proved less than adequate to meet the challenges of the tumultuous era.


Walter F. Pratt, Jr. is a professor of law at the University of Notre Dame Law School. He is the author of Privacy in Britain and of articles and contributions to books on American legal history.