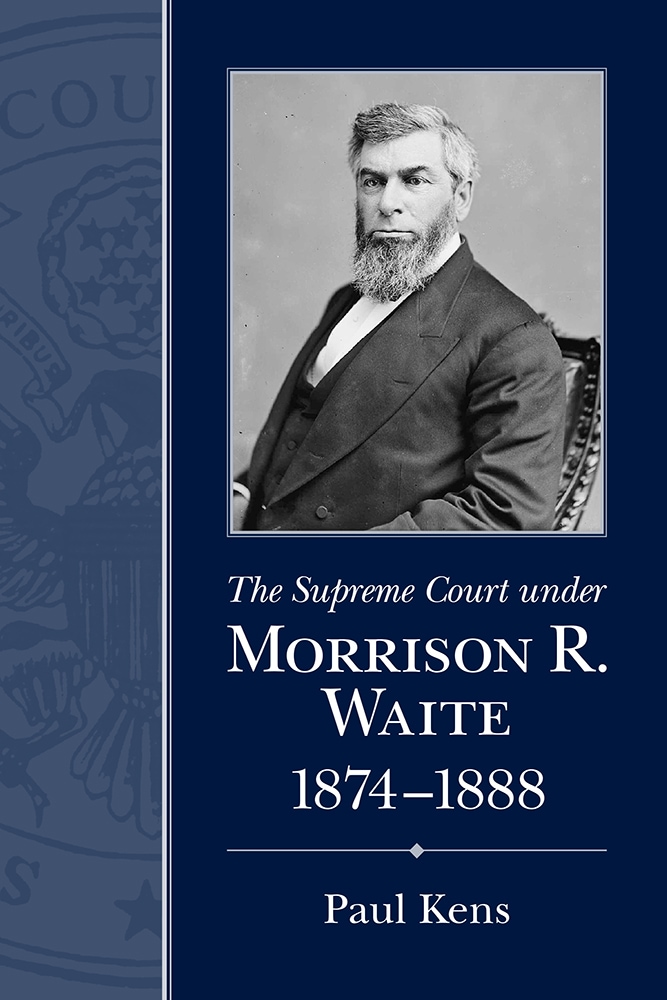 In The Supreme Court under Morrison R. Waite, 1874-1888, Paul Kens provides a history of the Court during a time that began in the shadow of the Civil War and ended with America on the verge of establishing itself as an industrial world power. Morrison R. Waite (1816-1888) led the Court through a period that experienced great racial violence and sectional strife. At the same time, a commercial revolution produced powerful new corporate businesses and, in turn, dissatisfaction among agrarian and labor interests. The nation was also consolidating the territory west of the Mississippi River, an expansion often marred with bloodshed and turmoil. It was an era that strained America's thinking about the purpose, nature, and structure of government and ultimately about the meaning of the constitution.

Some of the landmark events faced by this Court centered on issues of civil rights. These ranged from the Colfax massacre and treatment of blacks in the South to the rights of women, conflicts with Mormons over polygamy and religious freedom, and the mistreatment of Chinese immigrants in the West. Economic concerns also dominated the decisions of the Court. Westward expansion brought conflicts over the distribution of public domain lands. The building and financing of the transcontinental railroad and the web of railroads throughout the nation brought great wealth to some, but that success was accompanied by the Panic of 1873, the first nationwide labor strike, and the Granger movement. Changes in business practices and concerns over concentrated wealth fueled debates over the limits of government regulation of business enterprise and the constitutional status of corporations. In addition to the more dramatic topics of civil rights and economic regulation, this study also covers such important issues of the day as bankruptcy, criminal law, interstate commerce, labor strife, bonds and railroad financing, and land disputes.

Challenging the conventional portrayal of the Waite Court as being merely transitional, Kens observes that the majority of these justices viewed themselves as guardians of tradition. Even while facing legal disputes that grew from the drastic changes in post-Civil War America's social, political, and economic order, the Waite Court tended to look backward for its cues. Its rulings on issues of liberty and equality, federalism and the powers of government, and popular sovereignty and the rights of the community were driven by constitutional traditions established prior to the Civil War. This is an important distinction because the conventional portrayal of this Court as transitional leaves the impression that later changes in legal doctrine were virtually inevitable, especially with respect to the subjects of civil rights and economic regulation. By demonstrating that there was nothing inevitable about the way constitutional doctrine has evolved, Kens provides an original and insightful interpretation that enhances our understanding of American constitutional traditions as well as the development of constitutional doctrine in the late nineteenth century.


Paul Kens is a professor of political science and history at Texas State University–San Marcos. His books include Lochner v. New York: Economic Regulation on Trial and Justice Stephen Field: Shaping Liberty from the Gold Rush to the Gilded Age.

"In this adroit survey of Supreme Court history from 1874 to 1888, Paul Kens brings an authoritative narrative packed with insightful analysis of the key cases, historical incident, and personalities, all placed in a dynamic historical context of racial violence, westward expansion, and increasingly powerful business interests. To this world of economic, social, and cultural turmoil and revolutionary change, the Supreme Court brought a determination to defend tradition and principled commitment to old values, federalism and popular sovereignty."—Chris Waldrep, Department of History, San Francisco State University