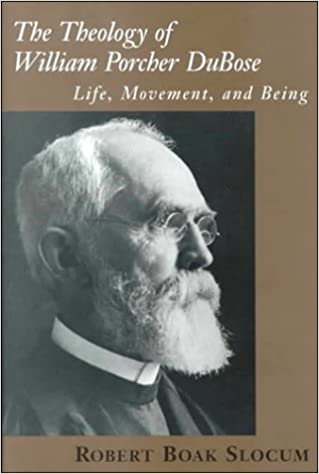 The Theology of William Porcher Dubose

Life, Movement, and Being

Clarifies the complex, polemical reflections of an esteemed Episcopal theologian

Recognized and appreciated as one of the most original and creative theologians in the Episcopal Church's history, William Porcher DuBose (1836-1918) published seven books of theological importance, including an autobiographical work, and his life is commemorated in a "lesser feast" of the Episcopal Calendar of the Church Year. Despite making significant contributions to Anglicanism, DuBose's works are, according to Robert Boak Slocum, more widely honored than understood or applied to questions facing theologians and lay people today. To fill the gap of knowledge and understanding, Slocum's study of DuBose draws parallels between essential experiences in his life and major themes in his published theology.

Slocum chronicles the theologian's life—including childhood on a plantation near Columbia, South Carolina; education at The Citadel and the University of Virginia; years as an adjutant and then as a chaplain in the Civil War; and a distinguished career as a chaplain, professor, and dean at the University of the South at Sewanee, Tennessee. Here, Slocum brings out the impact of conversion, suffering, discovery, and transformation on the development of DuBose's theology and also investigates how in DuBose's own thinking, theology is deeply connected with the experience of the Christian life as lived, especially in the context of the life of the church.


Robert Boak Slocum is the rector of the Church of Holy Communion in Lake Geneva, Wisconsin, and a lecturer in theology at Marquette University. He is the editor of A New Conversation: Essays on the Future Theology and the Episcopalian Church and Prophet of Justice, Prophet of Life: Essays on William Stringfellow.

"In recent years Robert Boak Slocum has made some notable contributions to the study of Anglicanism through his efforts as an editor of essays, dictionary articles, and documents about the history and theology of the Episcopal Church. He enhances his reputation as a chronicler of the Episcopal tradition in this brief but comprehensive book about the theology of William Porcher DuBose."—Anglican Theological Review