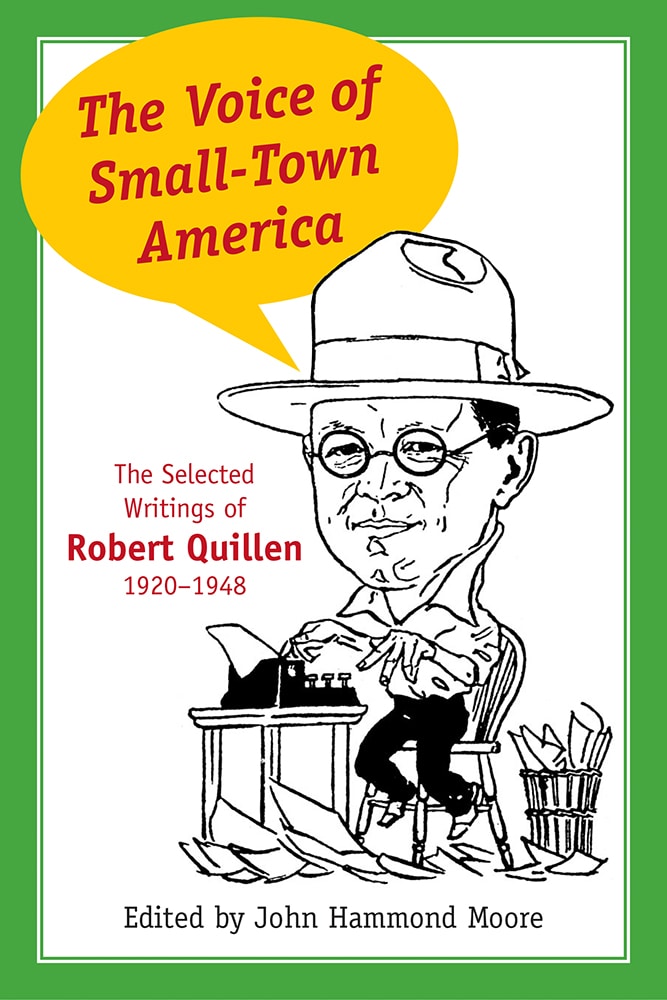 The Voice of Small-Town America

Deemed "the Sage of Fountain Inn" by Alexander Woollcott, newspaper publisher and editor Robert Quillen (1887-1948) used the forum of the Fountain Inn Tribune to bring his anecdotes and opinions from small-town upstate South Carolina to an international audience. The Mark Twain or Garrison Keillor of his day, Quillen developed a reputation as an authentic voice of small-town life, and his words were reprinted in Collier's, the Saturday Evening Post, Literary Digest, and other publications. At the height of his syndication, Quillen's writings could be found in more than four hundred newspapers in North America and Europe with a combined circulation above twelve million. Edited by historian John Hammond Moore, the essays, editorials, one-liners, fables, and random comments collected in this volume return to print Quillen's wit and insights after a decades-long hiatus.

A native of Kansas, Quillen became a converted Southerner over time, and his conservative opinions—especially concerning national politics, Depression-era reforms, and the war effort—reflect those circumstances. Presented in chronological order, the previously published and unpublished pieces collected in this volume include Quillen's rants against noisy neighbors, barking dogs, cats, birds, litter, bootleggers, lynching, sordid county politics, and the encroachment of the federal government. Here, too, are his most famous hometown characters, Willie Willis and Aunt Het, as well as "Letters to Louise," his comic public messages to his teenage daughter that proved wildly popular with everyone but the addressee.

In addition to Quillen's pieces, Moore also provides a brief biography and overview of his subject's career and literary aspirations beyond the venue of newsprint. Twelve p


John Hammond Moore is a veteran journalist and historian with more than twenty books to his credit, including A Plantation Mistress on the Eve of the Civil War: The Diary of Keziah Goodwyn Hopkins Brevard, 1860–1861 and Carnival of Blood: Dueling, Lynching, and Murder in South Carolina, 1880–1920. Moore resides in Columbia, South Carolina.

"Robert Quillen's tongue was planted so deeply in his cheek that I doubt he could speak clearly. The Voice of Small-Town America is satire, sarcasm, and uncommonly rational observation in its highest form. Someone needs to pick up where Quillen left off. This book is flat-out fun, and proves that the head-scratching perplexities of 1920–1948 haven't been eradicated."—George Singleton, author of Work Shirts for Madmen

"In The Voice of Small-Town America John Hammond Moore has made available to readers a rich compilation of the writings of Robert Quillen. Once again the 'sage of Fountain Inn' speaks in all the freshness and candor that he brought for three decades not only to the South Carolina upstate but to the entire nation. In addition, Moore has provided an insightful context for Quillen's work in his introduction and chapter notes. Today's readers will be as intrigued as Quillen's original audience by the frank assessment of life in a small town in the twentieth century."—A. V. Huff, Jr., professor emeritus of history, Furman University