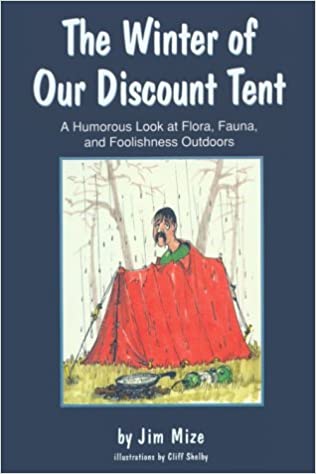 The Winter of Our Discount Tent

A Humorous Look at Flora, Fauna, and Foolishness Outdoors

According to Jim Mize, nature has no mercy—just a sense of humor—and in this hilarious romp through the woods, he waxes comic about carnivorous plants, insects that make people nervous, and birds with bad names. He points out, for instance, that all plants are edible. It's just that some of them will kill you.

Jim tells parents how to referee while paddling a boat, raise kids that people will like, and survive two hobbies no child can resist—rock collecting and entomology. He makes hunters and anglers chuckle as he ponders the purpose of carp ("fish so ugly they have to spawn in muddy water"), the perplexities of orienteering ("Getting lost has never been much of a problem for me; the problem is getting found.") and the procedure for getting crappie to bite at night ("Lay your rod down, hold a cup of scalding coffee in one hand and a floppy sandwich in the other, and, if possible, try to balance the open thermos on one leg.").

Jim also answers such age-old questions as to why women fish better than men and why people give homes to shoe-chewing puppies. His amusing insights are guaranteed to make you laugh out loud in renewed appreciation of the great outdoors.


Jim Mize writes outdoor humor for three newspaper columns and several magazines, and in the last five years, he has received more than twenty awards from state, regional, and national outdoor writing associations. Jim grew up in Bassett, Virginia, and now lives in Greenville, South Carolina.