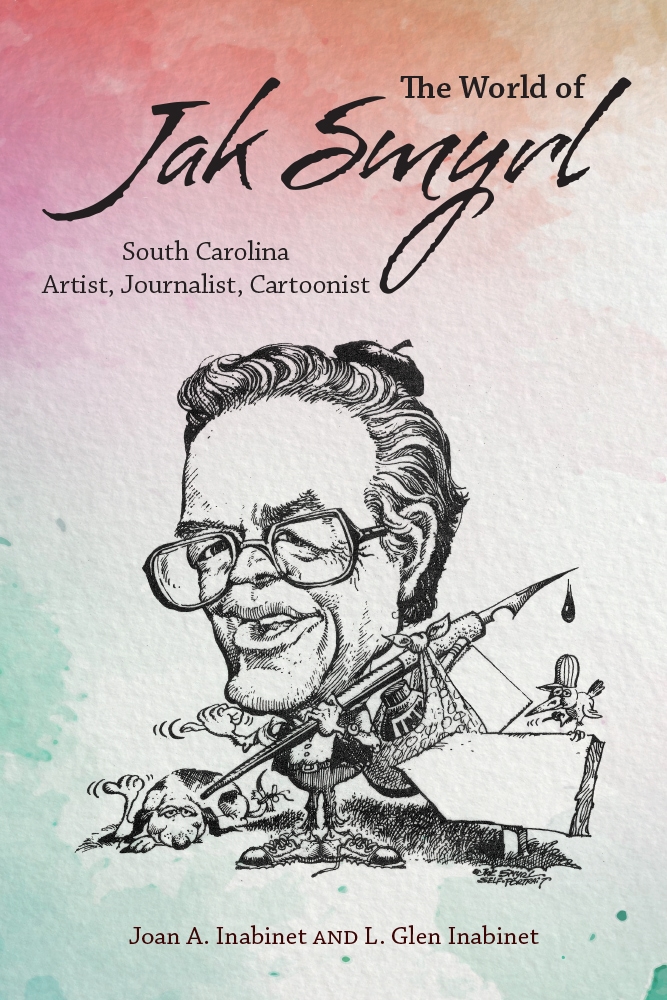 The World of Jak Smyrl

This quip by Jak Smyrl, born Oscar Jackson Smyrl, Jr., in Camden, South Carolina, captures all the charm, humility, and humor of a one-of-a-kind character, beloved cartoonist, artist, and journalist who uniquely rendered his era and place with his pen, brushes, and words. In this long-overdue biography ranging from his humble beginnings to being honored by the South Carolina General Assembly "for his distinguished career as an artist" with thanks for "lightening the heart of uncounted South Carolinians," his life and legacy is honored, and his love for South Carolina is magnified.

Warm and intimate, this is the story of a gentle and self-effacing man with an uncanny talent and a dry, whip-smart sense of humor that was never cruel but brought people together while enlarging their lives with pleasure. He discovered his talent while young and used it throughout his life to spotlight not only the foibles of the world around him but the goodness he found there as well. It was a good life, well lived yet not without its sorrows—but always infused with an admirable and infectious optimism, a hallmark of his character.

From Smyrl's work illustrating members of his high school football team for a newspaper to his war experiences, and from his struggling-artist days as a student at the University of South Carolina and the Art Institute of Pittsburgh to landing his dream job, where he became "Jak" (without that "C"), as the first staff artist of the State newspaper in Columbia, South Carolina, Joan A. Inabinet and L. Glen Inabinet highlight excerpts from his letters and diaries that offer trenchant insights into the man and his times.

Enhanced by photographs and Smyrl's illustrations, The World of Jak Smyrl presents a remarkable slice of small-town and rural southern life in the 1920s and 30s, moving on to the wider world and the turmoil of World War II through the turn of the millennium. Some artists' lives are worth chronicling because their unique vision and their works are fine-tuned to capturing the flavor of an era and its color—Jak Smyrl's life is one of these.


Joan A. Inabinet and L. Glen Inabinet, freelance writers and editors specializing in local history, are former teachers, English and history, respectively, and co-authors of A History of Kershaw County, South Carolina, with seven books between them.

"Reflected in a lifetime of cartooning, Jak Smyrl was a kind and gentle soul who championed the downtrodden and gave voice to the hapless dogs, birds, and myriad critters populating his creations. Perhaps the legend found in his iconic maps best explains our reaction to his comic genius: 'One inch equals one smile.'"—Robert Ariail, award-winning editorial cartoonist

"A rich and colorful portrait of the world of Jak Smyrl, beloved artist/cartoonist for the State and the Columbia Record. The Inabinets take us on an engrossing ride through Smyrl's Camden childhood during the Depression, his war years in the Pacific, and his life as a cultural cartoonist afterwards. A vivid tapestry of remembrance of South Carolina during the twentieth century."—Tony Scully, mayor, Camden, South Carolina (2012–2016)

"The World of Jak Smyrl is a well-researched book about a remarkable man Even readers who are unfamiliar with Smyrl and his vast body of work will appreciate the authors' efforts at creating a "time capsule" that captures small-town life in the rural south, harrowing wartime experiences, and a distinguished career that will be appreciated well into the future."—Southeastern Librarian