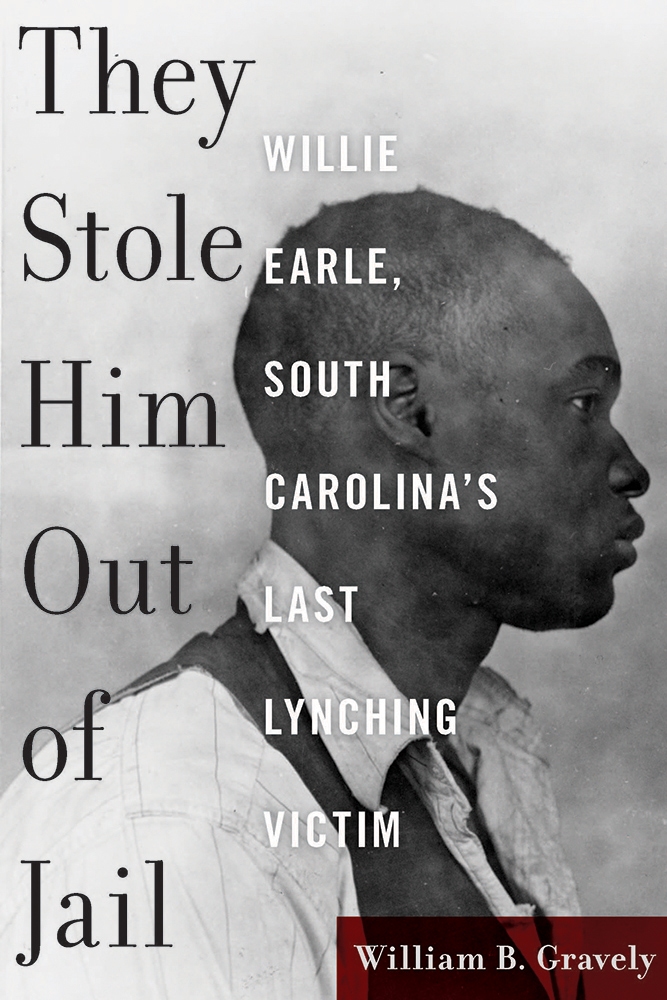 They Stole Him Out of Jail

The most comprehensive account of the horrific lynching of Willie Earle

Before daybreak on February 17, 1947, twenty-four-year-old Willie Earle, an African American man arrested for the murder of a Greenville, South Carolina, taxi driver named T. W. Brown, was abducted from his jail cell by a mob, and then beaten, stabbed, and shot to death. An investigation produced thirty-one suspects, most of them cabbies seeking revenge for one of their own. The police and FBI obtained twenty-six confessions, but, after a nine-day trial in May that attracted national press attention, the defendants were acquitted by an all-white jury.

In They Stole Him Out of Jail, William B. Gravely presents the most comprehensive account of the Earle lynching ever written, exploring it from background to aftermath and from multiple perspectives. Among his sources are contemporary press accounts (there was no trial transcript), extensive interviews and archival documents, and the "Greenville notebook" kept by Rebecca West, the well-known British writer who covered the trial for the New Yorker magazine. Gravely meticulously re-creates the case's details, analyzing the flaws in the investigation and prosecution that led in part to the acquittals. Vivid portraits emerge of key figures in the story, including both Earle and Brown, Solicitor Robert T. Ashmore, Governor Strom Thurmond, and West, whose article "Opera in Greenville" is masterful journalism but marred by errors owing to her short stay in the area. Gravely also probes problems with memory that resulted in varying interpretations of Willie Earle's character and conflicting narratives about the lynching itself.

Although the verdict was in many ways a victory for white supremacy during the waning years of Jim Crow, it still drew unprecedented public attention to the horrors of lynching, and no similar event has occurred in the state since. Yet, more than seventy years later, the crisis in criminal justice—especially as it pertains to African Americans, who are incarcerated at far higher rates than whites—remains a national challenge. This book is a compelling reminder not only of past traumas but of how far South Carolina and the country has yet to go.


William B. Gravely, professor emeritus at the University of Denver, is the author of Gilbert Haven, Methodist Abolitionist, as well as numerous articles on religion and social change. He is a native of Pickens County, South Carolina, where the murder of T. W. Brown occurred and where Willie Earle was jailed before his abduction.

"With arresting detail, this book documents a gruesome and haunting chapter in South Carolina's history. Willie Earle's tragic death in 1947 sparked intense scrutiny among citizens, journalists, white supremacists, and civil rights leaders. In a meticulously researched volume, Will Gravely offers a captivating assessment of Earle's brutal lynching and its impact in South Carolina and across the nation."—Bobby J. Donaldson, University of South Carolina

"Forty years in the making, this is the definitive study of one of the most important lynchings of the twentieth century. Gravely, an upstate South Carolina native with unprecedented access to people and sources, provides a thorough and provocative exploration of the background, events, and legacy of Willie Earle's death."—Bruce E. Baker, Newcastle University

"Will Gravely meticulously reconstructs the terrible, dramatic events of 1947 in painstaking detail. They Stole Him Out of Jail will remain the definitive study of South Carolina's last lynching and is a must-read for anyone seeking to understand the region's racial wounds."—Kari Frederickson, University of Alabama

"...should be a required textbook for any college course on Southern history. There would be no better book for understanding Southern culture and how we have struggled with humanitarian progress in law enforcement, religious understandings regarding integration and civil rights for all the different peoples of the South."—Pickens County Courier

"They Stole Him Out of Jail reminds readers that the history of lynching and racial violence in the United States is not a closed book, but an ever-relevant story, and that the historian's job is to continually engage with these legacies as they continue to be relevant."—Criminal Law and Criminal Justice Books

"They Stole Him Out of Jail is a welcome addition to the growing list of detailed case studies of individual lynching incidents that remain a disturbing blemish on the history of the American South, and, more broadly, the entire nation."—The Journal of American History

"This book is an important read not only because it covers a crucial part in South Carolina's racial history, but also because it is vital to learn how lynching was used as a brutal tool to keep white supremacy in power... In light of today's protests on police brutality and calls for criminal justice reform, this book serves as a stark reminder of how far we've come in our justice system in the treatment of black people and how much farther we still need to go."—South Carolina Libraries

"Gravely's work is an impressive and all-encompassing account of a painful episode in South Carolina's history."—The Journal of African American History

"Gravely's writing is engaging and lyrical... The reader will come away with a clearer understanding of how Jim Crow, judicial competition, white supremacy, and corruption prevented the enforcement of rights for African Americans against lynching in the South. This work ties local history in South Carolina to the national and regional racial movements of the time, making it important for both historians and interested casual readers."—Journal of Southern History