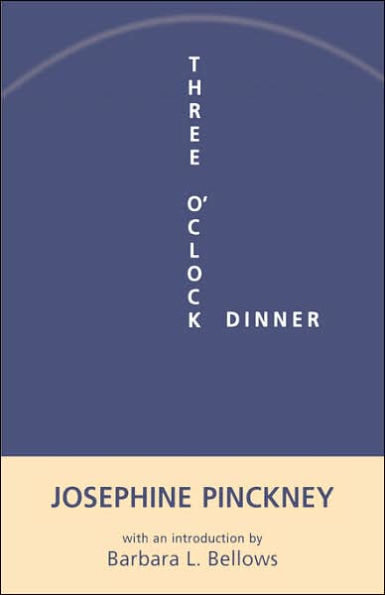 First published in 1945 to international acclaim and winner of the Southern Authors Award, Three O'Clock Dinner is Josephine Pinckney's best-selling novel about an ill-fated marriage on the eve of World War II. This powerful tale written by a consummate Charleston insider and set in the historic city resonates with universal appeal by daring to touch on topics that had been taboo. Three O'Clock Dinner reveals how the modern world has intruded in a most unwelcome way upon the Redcliffs, a Charleston family long on pedigree but short on cash. Mortified when their son "Tat" elopes with the henna-hairied daughter of the Hessenwinkles, an especially galling bourgeois clan, the Redcliffs are determined to respond with civility. They invite their son, his new wife, and her family for Sunday dinner, served at the traditional time of three in the afternoon. Tension builds across an expanse of white damask. After mint julep aperitifs, dinner claret, and Madeira toasts, a chance remark ignites the novel's climax amid a flurry of raised voices, hurt feelings, and broken china. Their new daughter-in-law's revelation further shatters the Redcliffs' well-ordered society but opens a door to forgiveness and redemption.

Barbara L. Bellows is the author of Benevolence among Slaveholders: Assisting the Poor in Charleston, 1670–1860. A professor of history at Middlebury College for seventeen years, she now divides her time between Charleston and Vermont.