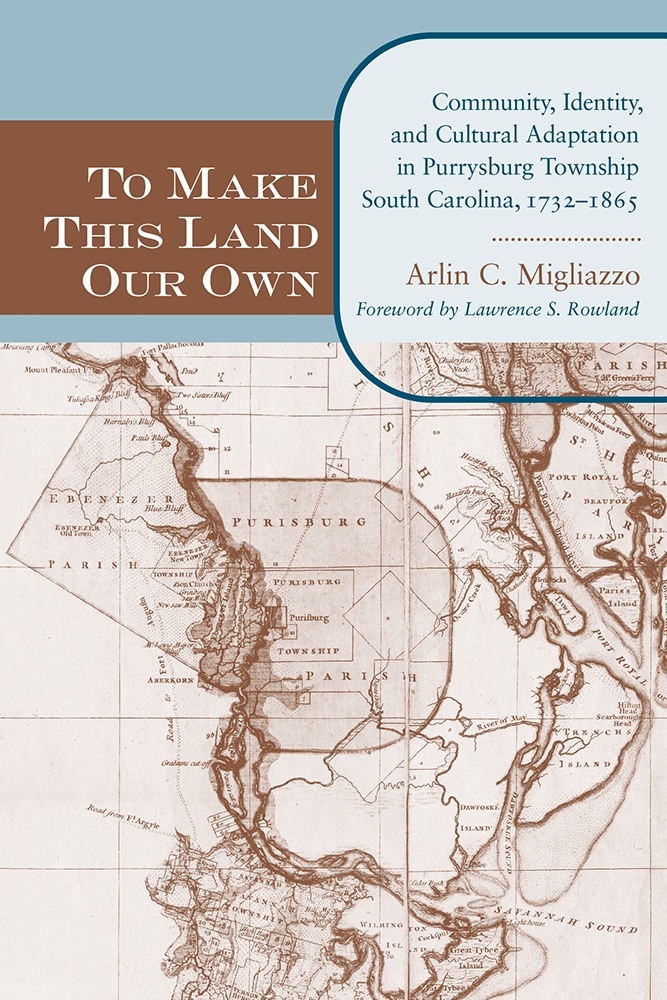 To Make This Land Our Own

On the banks of the lower Savannah River, the military objectives of South Carolina officials, the ambitions of Swiss entrepreneur Jean Pierre Purry, and the dreams of Protestants from Switzerland, France, Germany, Italy, and England converged in a planned settlement named Purrysburg. This examination of the first South Carolina township in Governor Robert Johnson's strategic plan to populate and defend the colonial backcountry offers the clearest picture to date of the settlement of the colony's Southern frontier by ethnically diverse and contractually obligated immigrants.

Arlin C. Migliazzo contends that the story of Purrysburg Township, founded in 1732 and set in the forbidding environment bounded by the Savannah River and the Coosawhatchie swamps, challenges the notion that white colonists shed their ethnic distinctions to become a monolithic culture. He views Purrysburg as a laboratory in which to observe ethnic phenomena in the colonial and antebellum South. Separated by linguistic, religious, and cultural barriers, the émigrés adapted familiar social processes from their homelands to create a workable sense of community and identity. His work is one of only a handful of examples of what has been deemed the "new social history" methodology as applied to a South Carolina subject.

Initially devastated by privation and a high mortality rate, Purrysburg residents also suffered the vicissitudes of an indifferent provincial elite, the encroachment of lowcountry rice planters, Prevost's invasion in 1779, and ultimate destruction of the settlement by Sherman's army. Migliazzo details the community's changing military and economic fortunes, the gradual displacement of its residents to neighboring communities, the role of African Americans in the region, the complex religious life of township settlers, and the quirky contributions of Purry's climatological speculations to the fateful siting of this first township.


Arlin C. Migliazzo is a professor of history at Whitworth College in Spokane, Washington, where he has also served as department chair and director of faculty development. He is a former Fulbright/Hays Scholar in American Studies and the editor of Lands of True and Certain Bounty: The Geographical Theories and Colonization Strategies of Jean Pierre Purry.

"Arlin Migliazzo gives us an in-depth examination of an early colonial settlement in the interior frontier. Through his carefully researched study of Purrysburgh we come to appreciate how it was both indicative of backcountry settlements and yet distinct in its composition and structure. Migliazzo explores the nature of this community through its inhabitants' interactions and relationships, both within and without the settlement, detailing their adaptations to new environs and the means by which a community identity was forged among strangers from diverse nations. For what it tells us of people, place, and purpose, To Make this Land Our Own is a significant contribution to our understanding of the development of the southern backcountry."—Kenneth E. Lewis, professor of anthropology, Michigan State University, and author of Camden: Historical Archaeology in the South Carolina Backcountry

"In this highly readable and minutely researched work, Migliazzo seeks to move beyond a local study of Purrysburg to understand its development within the larger context of the colonial South."—H-Net Reviews