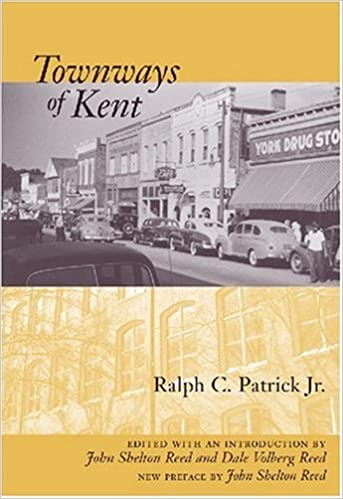 Immersion into town life in York, South Carolina, was an easy task for Robert C. Patrick Jr., a native of nearby Gastonia, North Carolina, who had familial ties to York's elite. But his personal connections proved to be a mixed blessing to the project. His informants were more forthcoming than they might have been with an outsider, but he never published his findings—to protect the privacy of his friends, he said. Now Patrick's 1954 Harvard dissertation has been edited by John Shelton Reed and Dale Volberg Reed to produce this first publication of Townways of Kent. It invites modern readers to experience midcentury small-town life as seen by the town's white upper and middle classes, and in particular from the viewpoint of "Old Kent" families. Often disparaging in their views of the neighboring African American and mill village communities, the townfolk proved to be further subdivided along rigorously defined lines of economic status and ancestry, but pride in maintaining their particular vision of the town shines through.

The volume also includes an introduction by the Reeds to place Patrick's work in its historical context.

Ralph C. Patrick Jr. (1920–1983) spent most of his professional career at the University of North Carolina's School of Public Health, where he was instrumental in establishing a training program in medical anthropology.

John Shelton Reed is the William Rand Kenan Jr. Professor Emeritus of Sociology at the University of North Carolina at Chapel Hill, where he was director of the Howard Odum Institute for Research in Social Science and cofounder of the Center for the Study of the American South.

Dale Volberg Reed is a writer, musician, and teacher of music.