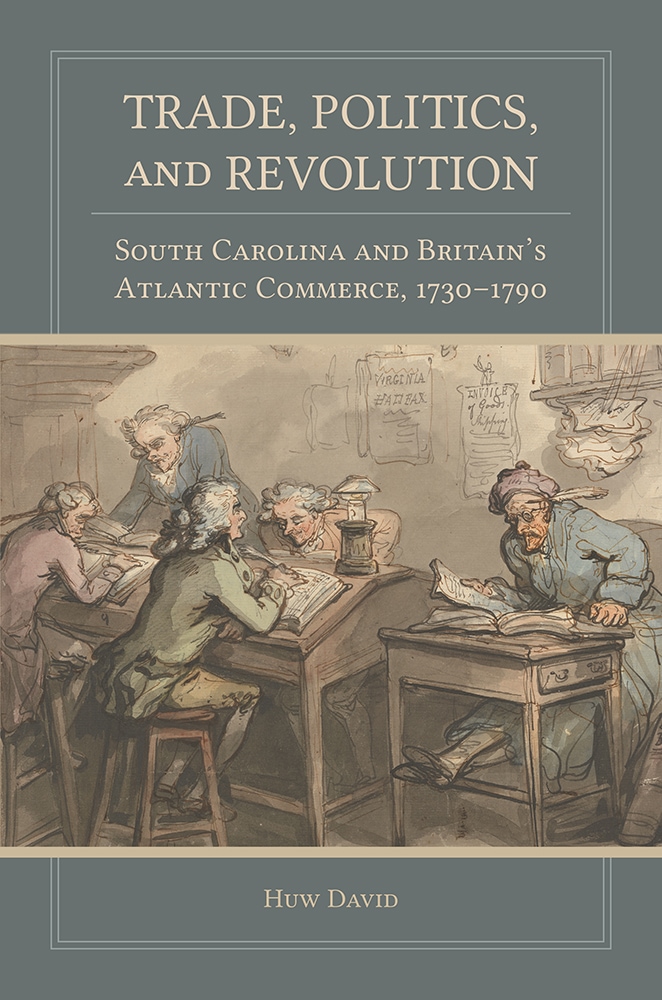 London's "Carolina traders," a little-known group of transatlantic merchants, played a pivotal but historically neglected role in the rise of tensions in the South Carolina lowcountry. In Trade, Politics, and Revolution, Huw David delves into the lives of these men and explores their influence on commerce and politics in the years before and after the American Revolution.

Beginning in the 1730s, a few select merchants in Charleston fueled South Carolina's economic rise, used their political connections to prosper in British-Carolinian trade, and then relocated to London, becoming absentee owners of property, plantations, and slaves. Using correspondence, business and slave trade records, newspapers, and a wealth of other sources, David reconstructs the lives of these Carolina traders and demonstrates their shifting but instrumental influence over the course of the eighteenth century. Until the 1760s these transatlantic traders served as a stabilizing force, using their wealth and political connections to lobby for colonial interests. As the British Empire flexed its power and incited rebellion with laws such as the so-called Intolerable Acts, South Carolinians became suspicious of the traders, believing them to be instruments of imperial oppression.

Trade, Politics, and Revolution offers a fresh understanding of trade in South Carolina's early history and the shifting climate that led to the American Revolution, as well as reaching beyond the war to explore the reconstruction of trade routes between the newly founded United States and Great Britain. By focusing on one segment of transatlantic trade, David provides a new interpretive approach to imperialism and exposes the complex, deeply personal rift that divided the Carolina traders from their homeland and broke the colonies from the mother country


Huw David holds a Ph.D. in history from Lincoln College, Oxford. His doctoral thesis was awarded the 2015 Hines Prize by the College of Charleston for the best first manuscript relating to the Carolina lowcountry and the Atlantic world. David is director of development for the Rothermere American Institute at the University of Oxford.

"Huw David's superb study of the transatlantic community of Carolina traders is an important contribution to American Revolutionary historiography. Deeply researched and powerfully argued, Trade, Politics, and Revolution complicates and enriches our understanding of the coming of the American Revolution and its consequences."—Peter S. Onuf, University of Virginia

"Huw David shows brilliantly how entangled South Carolina's economy was before and after independence and illustrates with penetrating insight how this continuing dependency shaped political action."—Trevor Burnard, University of Melbourne

"This is a highly readable history of the creation, and then the demise, of political economic relations between colonial South Carolina and London. David's study will be indispensable to scholars of South Carolina and the Revolutionary era, who will find his explanations for the colony's enthusiastic embrace of the American cause both exciting and original."—Emma Hart, University of St. Andrews

"Huw David masterfully reveals how the tumultuous politics of the British Atlantic in the eighteenth century were entwined with shifting structures of commerce and trade. Impeccably researched and clearly written, this book explains both the ruptures and enduring bonds between South Carolina and Britain in the age of the American Revolution. Atlantic history at its best!"—Jay Sexton, University of Missouri

"Huw David has produced a detailed, elegantly written, and masterful study of merchants on both sides of the Atlantic before, during, and after the American Revolution. He encourages us to rethink how America was bound and then unbound to Britain during a critical time for both places."—Patrick Griffin, University of Notre Dame

"Trade, Politics, and Revolution is well researched and sharply written... this excellent study of the Carolina trade between 1730 and 1790 will prove useful to scholars of South Carolina, Atlantic political economies, and debates about the causes of the American Revolution."—Journal of Southern History

"beautifully organized and complete with biographical sketches of his characters, illustrations of particular people, seascapes, unique buildings and scenes, along with data tables...This fascinating manuscript gives a chronology that is very helpful in placing the history of the relationships between the maritime merchants and the Charleston citizens. Also there is a brief but informative sketch of many of the merchants and their investments and families."—Southeastern Librarian