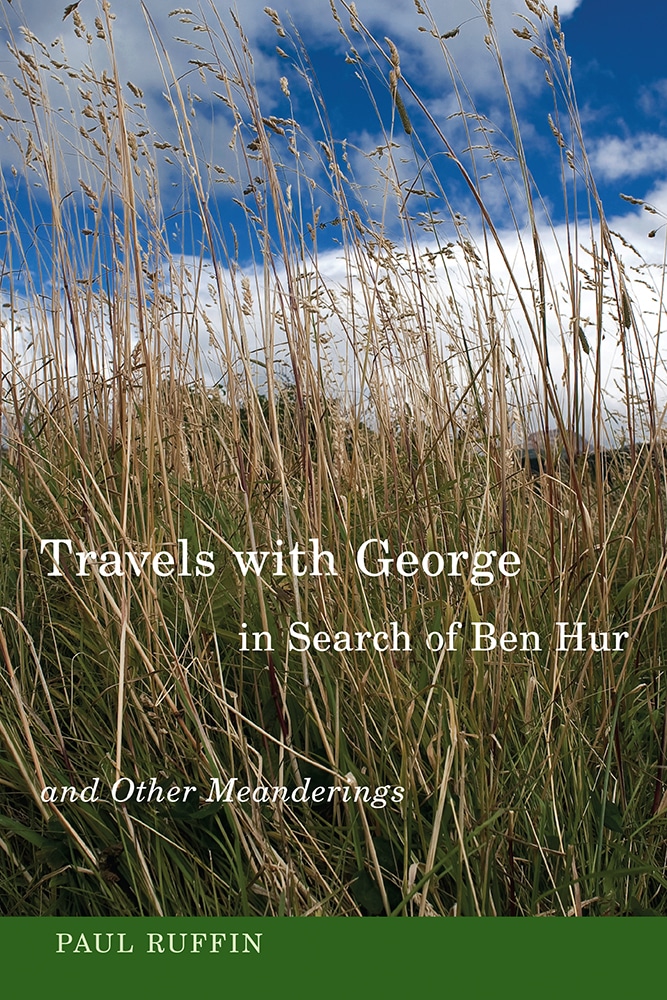 Travels with George, in Search of Ben Hur and Other Meanderings

This fourth collection of essays by Paul Ruffin highlights his idiosyncratic wit and practiced storytelling skills in memorable autobiographic pieces ranging from the comic to the confessional.

The first section, "Things Literary, More or Less," includes the title essay, in which Ruffin takes the reader on a rollicking tour with iconic Southern writer George Garrett, which ends with the two men locating the ghostly remains of an obscure Texas hamlet called Ben Hur and talking with an eccentric representative of the town's handful of inhabitants. In other essays Ruffin workshops a cowboy poem with a couple of deputy sheriffs, reveals aspects of Edgar Allan Poe's life never before published, reviews some unusual books, and shares the story of a boy who speaks only in hymns. Ruffin concludes the section with the tale of an invigorating flight to San Juan in an old DC-6.

In the next section, "On Likker and Guns," Ruffin summarizes his drinking career, transcribes the conversation between two rats that destroy his university office, and tells the tale of a bowhunter who asked him for his deer bladder. He also introduces the reader to a sharpshooter who, while trying to demonstrate his prowess with an old rifle, kills an old man's tractor. Finally Ruffin takes the reader on a trip to a Texas gun show to meet the menacing Boram, the clueless Billy Wayne, and a vigilant wife dedicated to preserving the family budget.

The book ends with an excerpt from Ruffin's unpublished memoir, "Growing Up in Mississippi Poor and White but Not Quite Trash," in which the author recalls his agonizing boyhood quest to unlock the mysteries of sex: "Never under this sun was there a child more ignorant of the act, the organs involved, or its marvelous potential for pleasure and fulfillment. And never was there a child who tried harder to understand."

Through Ruffin's sly vision of himself and his surroundings and his ability to focus attention on life's curious, defining moments, these essays reflect some of the best aspects of contemporary literary nonfiction. Every tale is vibrantly alive with the sincere voice, crisp details, bold images, and distinctive dialogue that readers have come to relish in Ruffin's myriad writings.


The 2009 Texas State Poet Laureate, Paul Ruffin is a Texas State University System Regents' Professor and Distinguished Professor of English at Sam Houston State University, where he is the founding director of the Texas Review Press and founding editor of the Texas Review. Ruffin is the author of two novels, three collections of stories, three earlier books of essays, and seven collections of poetry. He is also the editor or coeditor of eleven other books. His work has appeared in the Georgia Review, Michigan Quarterly Review, New England Review, Paris Review, Poetry, Southern Review, and elsewhere.

"Ruffin has long been the South's reliable literary postman, for years delivering bundles of first-class poetry, fiction, and nonfiction. Travels with George is priority reading, a joyous, awakening book that encourages readers to track the meanderings of their lives. Like those of mail recipients, addresses change as people travel decades, and the bulk of living smothers memory until a wondrous book like Travels with George slips onto the bedside table and makes a person appreciate the gift of life."—Sam Pickering, University of Connecticut, Storrs