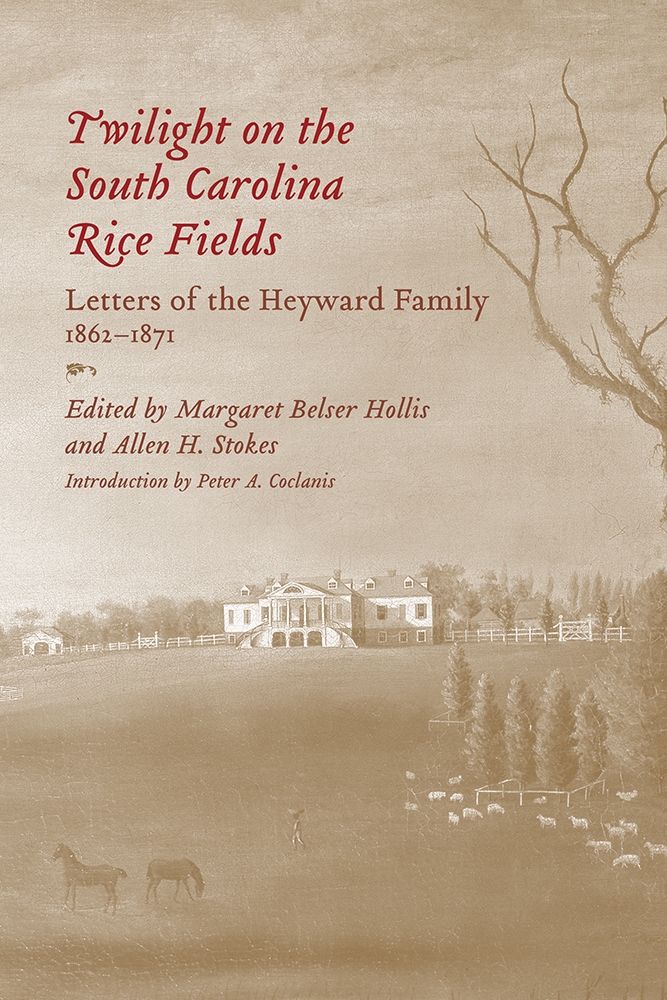 The Civil War and Reconstruction eras decimated the rice-planting enterprise of the South, and no family experienced the effects of this economic upheaval quite as dramatically as the Heywards of South Carolina, a family synonymous with the wealth of the old rice kingdom in the Palmetto State. Twilight on the South Carolina Rice Fields collects the revealing wartime and postbellum letters and documents of Edward Barnwell "Barney" Heyward (1826-1871), a native of Beaufort District and grandson of Nathaniel Heyward, one of the most successful rice planters and largest slaveholders in the South. Barney Heyward was also the father of South Carolina governor Duncan Clinch Heyward, author of Seed from Madagascar, the definitive account of the rice kingdom's final stand a generation later.

Edited by Margaret Belser Hollis and Allen H. Stokes, the Heyward family correspondence from this transformational period reveals the challenges faced by a once-successful industry and a once-opulent society in the throes of monumental change. During the war Barney Heyward served as a lieutenant in the engineering division of the Confederate army but devoted much of his time to managing affairs at his plantations near Columbia and Beaufort. His letters chronicle the challenges of preserving his lands and maintaining control over the enslaved labor force essential to his livelihood and his family's fortune. The wartime letters also provide a penetrating view of the Confederate defense of coastal South Carolina against the Union forces who occupied Beaufort District. In the aftermath of the conflict, Heyward worked with only limited success to revive planting operations. In addition to what these documents reveal about rice cultivation during tumultuous times, they also convey the drama, affections, and turmoil of life in the Heyward family, from Barney's increasingly difficult relations with his father, Charles Heyward, to his heartfelt devotion to his wife, the former Catherine "Tat" Maria Clinch, and their children.

Twilight of the South Carolina Rice Fields also features an introduction by noted economic historian Peter A. Coclanis that places these letters and the legacy of the Heyward family into a broader historical context.

"Twilight in the Carolina Rice Fields is a stereotype-buster. Anyone who claims to understand southern planters in the 1860s and 1870s should read Barney Heyward's letters and learn just how complicated planters' attitudes could be towards their families and marriages, their optimistic dreams and half-baked schemes, and their enslaved workers who became their employees."—Stephen G. Hoffius, coeditor of Landscape of Slavery: The Plantation in American Art and Northern Money, Southern Land: The Lowcountry Plantation Sketches of Chlotilde R. Martin

"The saga of the Heyward family of the Carolina Lowcountry is nearly unsurpassed in American history. Colonel Daniel Heyward fought Indians and Spaniards in the early eighteenth century and carved an empire from the Southern frontier to become the largest planter in South Carolina and one of the richest men in America. His oldest son, Thomas, signed the Declaration of Independence, and his youngest son, Nathaniel, became one of the leading practitioners of tidal culture rice and the largest slave owner in the history of the South. On the eve of the Civil War, the tentacles of Heyward family wealth stretched from New York to Texas. The family letters published here for the first time recount the decline of that vast fortune as a consequence of the Civil War and Reconstruction. Expertly edited by Margaret Belser Hollis and Allen Stokes, and with an illuminating introduction by eminent economic historian Peter Coclanis, this collection of letters will be a classic of South Carolina history and it should be eagerly sought by specialists and enthusiasts alike."—Lawrence S. Rowland, professor of history emeritus, University of South Carolina at Beaufort