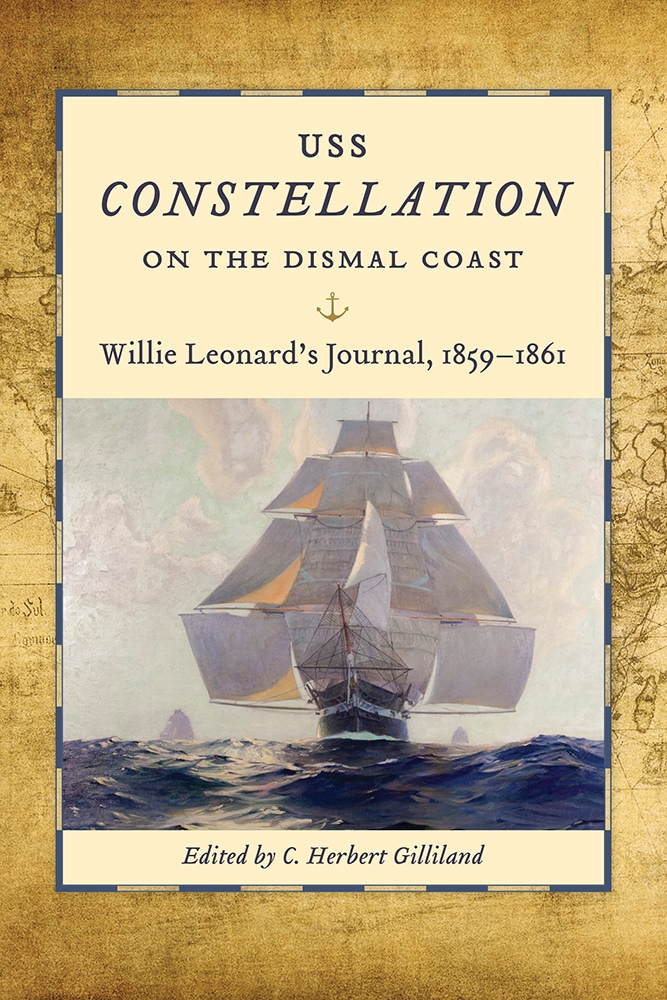 USS Constellation on the Dismal Coast

Today the twenty-gun sloop USS Constellation is a floating museum in Baltimore Harbor; in 1859 it was an emblem of the global power of the American sailing navy. When young William E. Leonard boarded the Constellation as a seaman for what proved to be a twenty-month voyage to the African coast, he began to compose a remarkable journal.

Sailing from Boston, the Constellation, flagship of the U.S. African Squadron, was charged with the interception and capture of slave-trading vessels illegally en route from Africa to the Americas. During the Constellation's deployment, the squadron captured a record number of these ships, liberating their human cargo and holding the captains and crews for criminal prosecution. At the same time, tensions at home and in the squadron increased as the American Civil War approached and erupted in April 1861.

Leonard recorded not only historic events but also fascinating details about his daily life as one of the nearly 400-member crew. He saw himself as not just a diarist, but a reporter, making special efforts to seek out and record information about individual crewmen, shipboard practices, recreation and daily routine—from deck swabbing and standing watch to courts martial and dramatic performances by the Constellation Dramatic Society.

This good-humored gaze into the lives and fortunes of so many men stationed aboard a distinguished American warship makes Gilliland's edition of Willie Leonard's journal a significant work of maritime history.


C. Herbert Gilliland is a professor of English at the U.S. Naval Academy in Annapolis, Maryland, and a retired captain in the naval reserve. His most recent book, Voyage to a Thousand Cares: Master's Mate Lawrence with the African Squadron, 1844–1846, received the John Lyman Award from the North American Society for Oceanic History. He also coauthored Admiral Dan Gallery: The Life and Wit of a Navy Original.

"William Leonard's stunningly detailed and readable account of USS Constellation's cruise off the coast of Africa breathes new life into an often overlooked part of American naval history. Gilliland's masterful edit ensures that this testament will long endure as an indispensable resource for all future scholars of the African Squadron."—John Pentangelo, former curator of the USS Constellation Museum

"Gilliland's editorial comments add scholarly context to this fascinating journal of service on board Constellation during her twenty-six month anti-slavery patrol off West Africa just before the Civil War. Willie Leonard's descriptions of life at sea, liberty on shore, and his transformation from green landlubber to able seaman in an American sloop of war during the glory days of the age of sail are wonderful stuff. Highly recommended."—Andrew C. A. Jampoler, author of Congo and Horrible Shipwreck!

"As the journal of a common American seaman during a cruise to police the illegal slave trade on the West African coast from 1859 to 1861, Willie Leonard's Journal will interest antebellum American historians, but it deserves a much wider audience because of C. Herbert Gilliland's superb editing achievement. Gilliland has skillfully and seamlessly integrated textual commentary which readily explains virtually all of the events, people, ships and naval terms mentioned in the Journal."—John Schroeder, emeritus professor of history, University of Wisconsin-Milwaukee

"This journal is a readable, fascinating account of life on the Constellation."—Norman C. Delaney, Gilliland, C. Herbert