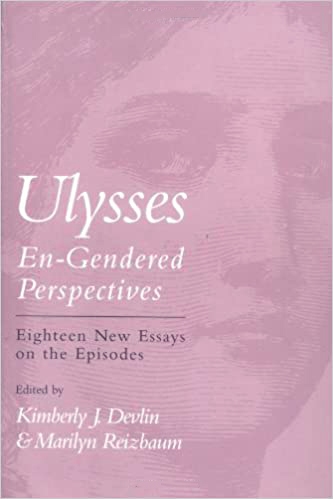 Eighteen New Essays on the Episodes

Perhaps no literary work of the twentieth century has caused more controversy than James Joyce's Ulysses. The book America wanted to burn has instead earned a place as one of the most complex and most studied volumes of fiction. In this collection of essays each of the eighteen contributors offers new commentary on one of the episodes in Ulysses. Throughout Ulysses—En-Gendered Perspectives the common critical concern is with varying articulations of "femininities" and "masculinities" in Joyce's modernist epic. Each contributor attends to the extensive and various markings of gender in Ulysses and examines the ways in which such markings generate and en-gender other meanings.

Gender is treated as a form of overwriting, in senses that include both excess and layering. Here the differentiations of "masculine" and "feminine," their definitions and elaborations, are approached in multiple ways and in changing contexts. Familial roles, labor assignments, perceptual modes, colonialist categories, sexualities, ethnicities, ways of knowing and learning, scents, tastes, and eating habits are but a few of the cultural phenomena the scholars explore.

Ulysses—En-Gendered Perspectives affords insight into Joyce's masterpiece from the present-day perspective of gender issues and is responsive as well to other influential trends such as historicism, psychoanalysis, and culture critique.


Kimberly J. Devlin is an associate professor of English at the University of California, Riverside, and the author of Wandering and Return in "Finnegan's Wake." Her articles on Joyce have appeared in PMLA, Novel, James Joyce Quarterly, and several essay collections.

Marilyn Reizbaum is professor of English at Bowdoin College and is currently a visiting lecturer in the English department at Tel Aviv University. She is the author of James Joyce's Judaic Other and numerous essays on Joyce.