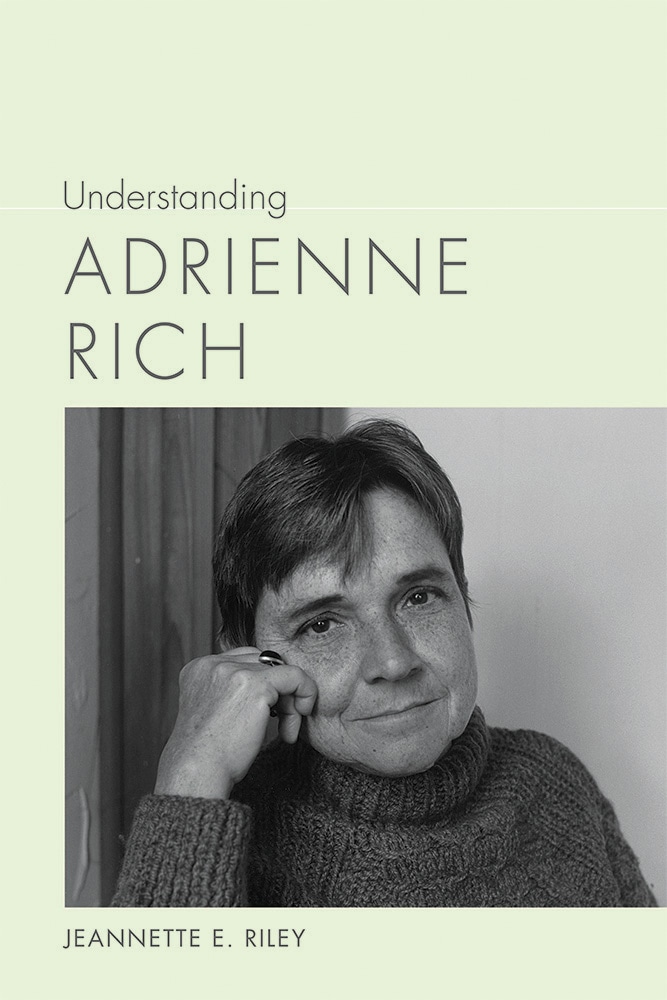 Among the most celebrated American poets of the past half century, Adrienne Rich was the recipient of awards ranging from the Bollingen Prize, to the National Book Award, to the Lannan Lifetime Achievement Award. In Understanding Adrienne Rich, Jeannette E. Riley assesses the full scope of Rich's long career from 1957 to her death in 2012 through a chronological exploration of her poetry and prose. Beginning with Rich's first two formally traditional collections, published in the late 1950s, then moving to the increasingly radical collections of the 1960s and 1970s, Riley details the evolution of Rich's feminist poetics as she investigated issues of identity, sexuality, gender, the desire to reclaim women's history, the dream of a common language, and a separate community for women.

Riley then tracks how Rich's writing shifted outward from the 1980s and 1990s to the end of her career as she evaluated her own life and place within her society. Rich examined her country's history as well, asking readers to consider what responsibility each person has—individually and communally—for changing the conditions under which we live. This book documents Rich's developing charge that poetry carries the ability to create social change and engage people in the democratic process.

Throughout, Understanding Adrienne Rich interweaves explications of Rich's poetry with her prose, offering a close look at the development of the author's voice from formalist poet, to feminist visionary, to citizen poet. In doing so, this volume provides a survey of Rich's career and her impact on American literature and politics.


Jeannette E. Riley is a professor of English and women's and gender studies at the University of Massachusetts, Dartmouth. Riley's research focuses on women's literature, with an emphasis on contemporary women writers and feminist theory. Her writings on Adrienne Rich have appeared in "Catch if you can your country's moment": Recovery and Regeneration in the Poetry of Adrienne Rich, From Motherhood to Mothering: The Legacy of Adrienne Rich's Of Woman Born, and Soundings: An Interdisciplinary Journal.

"Adrienne Rich took on the issues of our time as no one before or since and created a brand-new idiom to convey a poetry of witness and essays of extraordinary brilliance. In Understanding Adrienne Rich, Jeannette E. Riley does Rich and her work a great service: drawing a map that continually moves between the life and the word with a brilliance of its own. This is an important contribution to understanding and appreciating one of our truly great voices."—Margaret Randall, author of She Becomes Time and Haydée Santamaría, Cuban Revolutionary: She Led by Transgression

"Throughout her career, Adrienne Rich resisted all attempts to limit or contain the wild energy of language and consciousness, insisting on the power of poetry to act in the political world. Clear and complex in equal measure, Jeanette Riley's Understanding Adrienne Rich is an exemplary response to Rich's call. Combining a convincing overview of the poet's career with attentive readings of crucial poems, Riley provides an ideal introduction for general readers and a solid foundation for future critical conversations."—Craig Werner, author of Adrienne Rich: The Poet and Her Critics