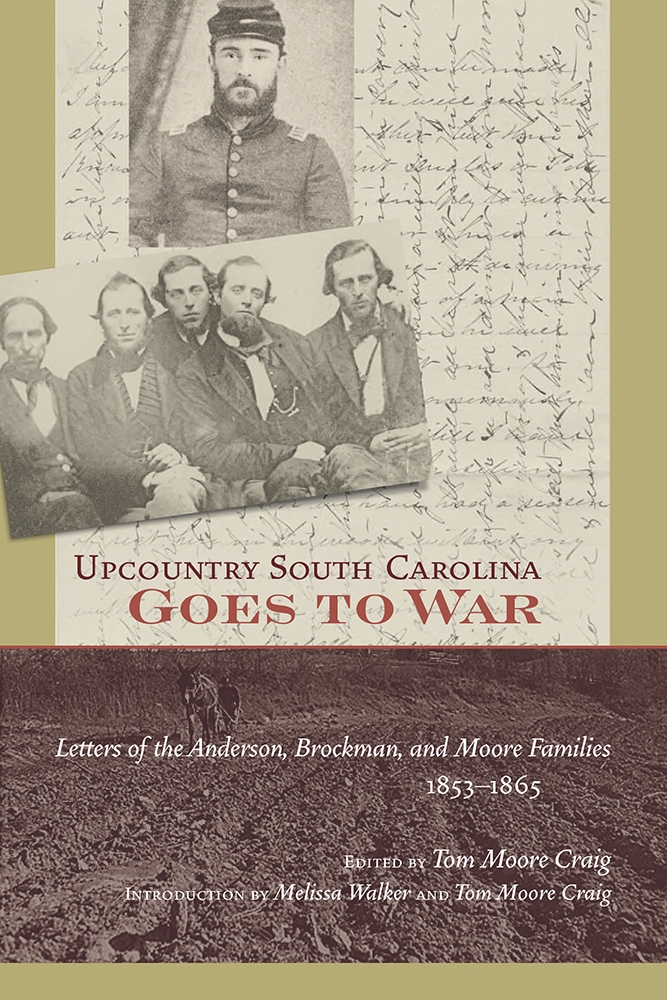 edited by Tom Moore Craig
introduction by Melissa A. Walker

Civil War letters to and from Spartanburg, South Carolina, rich with details on the battlefront and home front

Upcountry South Carolina Goes to War chronicles the lives and concerns of the Anderson, Brockman, and Moore families of piedmont South Carolina during the late-antebellum and Civil War eras through 124 letters dated 1853 to 1865. The letters provide valuable firsthand accounts of evolving attitudes toward the war as conveyed between battlefronts and the home front, and they also express rich details about daily life in both environments.

As the men of service age from each family join the Confederate ranks and write from military camps in Virginia and the Carolinas, they describe combat in some of the war's more significant battles. Though the surviving combatants remain staunch patriots to the Southern cause until the bitter end, in their letters readers witness the waning of initial enthusiasm in the face of the realities of combat. The corresponding letters from the home front offer a more pragmatic assessment of the period and its hardships. Emblematic of the fates of many Southern families, the experiences of these representative South Carolinians are dramatically illustrated in their letters from the eve of the Civil War through its conclusion.


A descendent of both the Moore and Anderson families, Spartanburg County native Tom Moore Craig is a retired history teacher and former state legislator.

Melissa Walker is the George Dean Johnson Jr. Professor of History at Converse College in Spartanburg.

"Bolstered by a valuable introduction, the letters reveal a common focus on kinship, faith, farming, education, and the whereabouts and well-being of family and friends at war. Courtney L."—Courtney L. Tollison, historian, Upcountry History Museum

"Absorbing and enlightening, this well edited volume is a major contribution to the history of the mid-nineteenth-century South Carolina upcountry. This correspondence among some of the founding upper class families of Spartanburg District provides a unique perspective on their preoccupations just before and during the Civil War; the letters reflect mostly personal concerns with occasional comments on wartime triumphs and despair. In this important respect, the letters reflect the general atmosphere of a Southern community distant from yet intimately involved with the battles that would determine the nature of its future."—Philip N. Racine, William R. Kenan Jr. Professor of history, Wofford College

"Upcountry South Carolina Goes to War introduces readers to three families bound together by kinship; by the social, religious, and economic ties of their rural community before the Civil War; and by losses among their kin during and immediately after the war. Their correspondence chronicles the upheaval and disintegration of a world so different from our own that our best hope of understanding it and the people who lived in it is through letters as true to life—that is, as alternately compelling, mundane, nuanced, and ordinary as everyday life can be—as these."—J. Tracy Power, historian, South Carolina Department of Archives and History, and the author of Lee's Miserables: Life in the Army of Northern Virginia from the Wilderness to Appomattox

"Upcountry South Carolina Goes to War offers readers more than one hundred letters that tell the stories of prominent Spartanburg District families, their lives before the Civil War, and the lives of three of their sons whose education and ambitions are disrupted by the war. These letters are a poignant, personal, and rich narrative history of the Civil War and the Army of Northern Virginia from First Manassas to Petersburg. They capture snapshot-like renditions of the campaigns, the soldiers, and the famous generals who led them, all culminating in a particularly touching letter from Thomas John Moore to his sister, describing the discovery of his slain brother and his battlefield burial at the end of Second Manassas. This is a valuable collection for anyone interested in the history of South Carolina confederates and of the upcountry."—W. Allen Roberson, director, South Carolina Confederate Relic Room and Military Museum