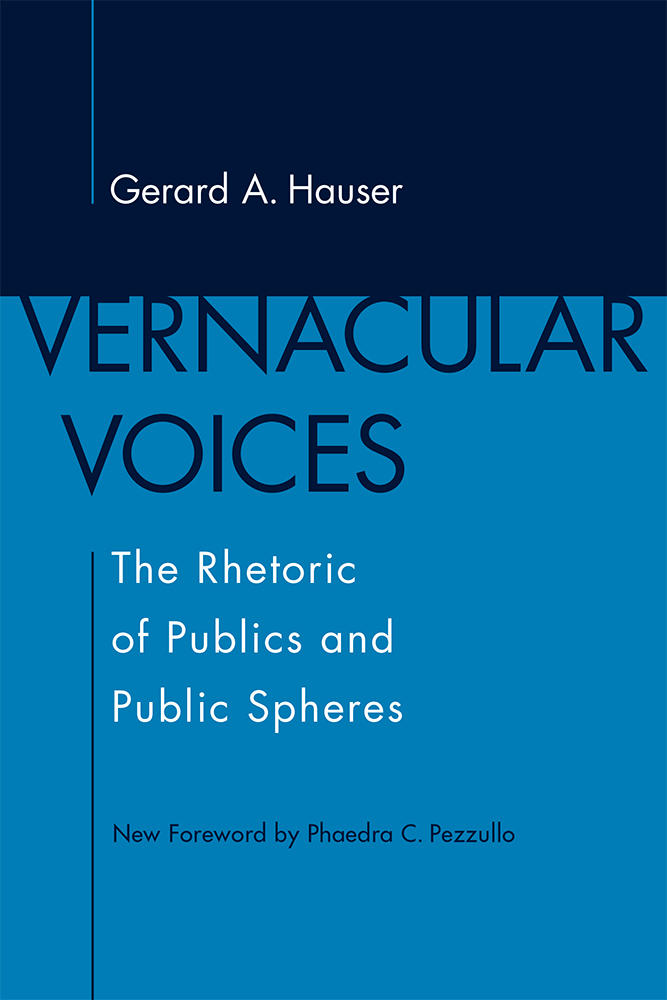 The Rhetoric of Publics and Public Spheres

A foundational text of twenty-first-century rhetorical studies, Vernacular Voices addresses the role of citizen voices in steering a democracy through an examination of the rhetoric of publics. Gerard A. Hauser maintains that the interaction between everyday and official discourse discloses how active members of a complex society discover and clarify their shared interests and engage in exchanges that shape their opinions on issues of common interest.

In the two decades since Vernacular Voices was first published, much has changed: in the aftermath of the 9/11 terrorist attacks, US presidents have increasingly taken unilateral power to act; the internet and new media have blossomed; and globalization has raised challenges to the autonomy of nation states. In a new preface, Hauser shows how, in an era of shared, global crises, we understand publics, how public spheres form and function, and the possibilities for vernacular expressions of public opinion lie at the core of lived democracy.

A foreword is provided by Phaedra C. Pezzullo, associate professor of communication at the University of Colorado Boulder.

"This diverting, timely study of what it means to have a voice in civil society and how it is achieved offers new conceptions of complex public spheres. . . This title would be apt to use as a textbook, given its wisdom, orderly and clear presentation, and interdisciplinary approach."—Choice Reviews

"And insisting upon seeing vernacular exchanges as important forms of political discourse is part and parcel of Hauser's very useful project of shifting attention away from a non-existent public sphere to the real publics in which people spend much of their lives. That project is useful for a variety of reasons, but one of the most striking is that it provides a much more hopeful view of political discourse in democracy."—Rhetoric Society Quarterly

"Gerard Hauser's Vernacular Voices is an ambitious, wide-ranging, and thought-provoking theoretical discussion of public opinion and the public sphere. Hauser rightly disputes the 'authority' we grant to opinion polls, and he aspires to develop a 'rhetorical' alternative for discovering and communicating public opinion."—Argumentation and Advocacy