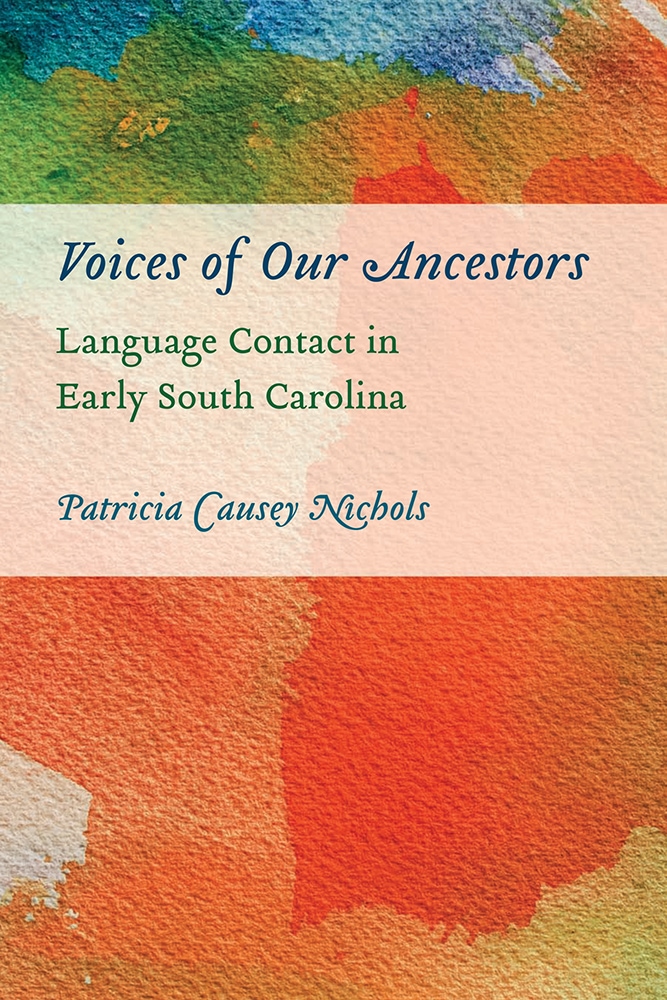 Voices of Our Ancestors

In Voices of Our Ancestors Patricia Causey Nichols offers the first detailed linguistic history of South Carolina as she explores the contacts between distinctive language cultures in the colonial and early federal eras and studies the dialects that evolved even as English became paramount in the state. As language development reflects historical development, Nichols's work also serves as a new avenue of inquiry into South Carolina's social history from the epoch of Native American primacy to the present day.

Because Charleston was among the foremost colonial American seaports, South Carolina experienced a diverse influx of cultures and languages from the onset, drawing influences from Native Americans, enslaved African Americans, and a plethora of European peoples—Scots-Irish, English, Jewish, German, and French Huguenot chief among them. Nichols tells the richly complex story of language contact from groups representing three continents and myriad cultures. In examining how South Carolinians spoke in public and private we glean much about how they developed a common culture while still honoring as best they could the heritages and tongues of their ancestors. Nichols pays particular attention to the development of the Gullah language among the coastal African American peoples and the ways in which this language—and others of South Carolina's early inhabitants—continues to influence the communication and culture of the state's current populations.

Nichols's synthetic treatment of language history makes expert use of primary source materials and is further enhanced by the author's field research with Gullah-speaking African Americans and with descendants of Native Americans, as well as her keen observation of her own European American community in South Carolina. Through her deft analysis of contemporary language variations and regional and ethnic speech communities, she advances our understanding of how diverse the South Carolina experience has been, from the lowcountry to the upcountry and all points in between, and yet how the need to communicate shared experiences and values has united the state's population with a common meaningful language in which the diverse voices of our ancestors can still be heard.


A native of Horry County, South Carolina, Patricia Causey Nichols is professor emerita of linguistics at San José State University. She has published extensively on Gullah linguistics and in the hybrid field of linguistic anthropology.

"Voices of Our Ancestors is a fascinating book and a must-read for anyone interested in South Carolina. Although Patricia Causey Nichols subtitles this gem 'Language Contact in Early South Carolina,' she could just have easily called it 'Out of Many One.' Colonial South Carolina was multicultural before the term was coined in the last century. With nine European ethnic groups, twenty-five West African ethnicities, and some forty-five Native American tribes, the colony was truly polyglot. In this delightful book we learn how what was an eighteenth-century babel became twenty-first century South Carolina's version of English. And we learn how our speech—like many other aspects of the Palmetto State—is different from that of our neighbors."—Walter Edgar, author of South Carolina: A History and editor of The South Carolina Encyclopedia

"In this beautifully written and brilliantly argued book Patricia Causey Nichols combines the best of history and linguistics in rich profiles of the many men and women-black, white, and red-who came together from a multitude of backgrounds to create a new culture in what would become South Carolina."—Charles Joyner, author of Down by the Riverside: A South Carolina Slave Community

"Voices of Our Ancestors is the book for anyone who ever wondered why people in one part of South Carolina sound differently from people in another. Patricia Causey Nichols is part linguist and part sleuth as she takes us on a journey to learn how roots in European, African, and Native American language survive today in our speech. This is an important work for anyone interested in social development of the Palmetto State."—Aïda Rogers, editor of Sandlapper: The Magazine of South Carolina