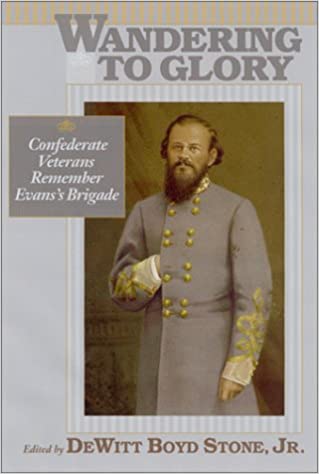 War stories from one of the most dynamic Confederate brigades

In Wandering to Glory DeWitt Boyd Stone, Jr., pieces together the words of officers and soldiers in an imaginative, nontraditional brigade history of one of the Confederacy's most active combat troops. Stone blends firsthand accounts from a variety of sources to tell the colorful story of Brigadier General Nathan George "Shanks" Evans and his "Tramp Brigade." An independent South Carolina unit never permanently attached to a particular army, Evans's Brigade traveled widely, making its way from one frontline to another and earning its nickname. Stone profiles the unit's accomplished but egotistical commander, who gained fame as a hero at the First Battle of Manassas, and traces its impressive war record, which began at Second Manassas and included its moment of glory at ground zero during the Battle of the Crater, at Petersburg, Virginia.

Nearly ten percent of all South Carolinians who fought in the Confederate army were members of Evans's Brigade. The troops numbered more than 8,300 and hailed from nearly every district in South Carolina. Their letters, diaries, and official reports reveal much about the state's participation in the war, from combat and camp life to death, desertion, capture, and furlough.

The accounts also illustrate the diverse social, economic, and educational backgrounds of the soldiers and officers drawn together in the brigade. From the eloquent writings of William Porcher Dubose to the tall tales of Dock Owen, a multitude of voices give life to the brigade's wartime experiences.


DeWitt Boyd Stone, Jr., is an administrator at Lander University in Greenwood, South Carolina. He is a descendant of two longtime Anderson County families; one of his great-grandfathers founded Lander, and another, who provided the inspiration for this volume, served in the 18th Regiment of South Carolina Volunteers. Stone has had a distinguished academic career in chemistry and science education at the University of Tennessee at Martin, the University of Zurich, and the National Science Foundation. He lives in Clemson, South Carolina.